Golf fans couldn't stop tweeting about Bryson DeChambeau after seeing how much size he has put on in the last three months. 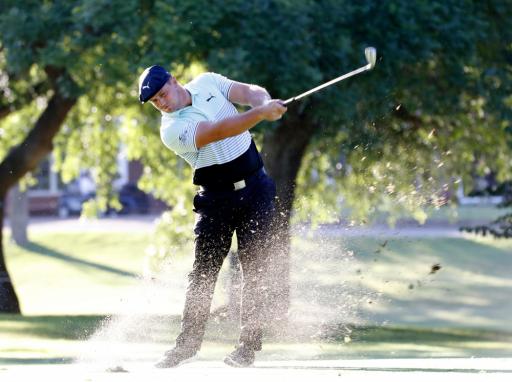 Bryson DeChambeau already shocked the world after his first body transformation when he added some serious muscle, in his quest to add more distance to his game, but after three months without seeing the American, he took everyone by surprise when he teed off at the Charles Schwab Challenge.

The World No.13 rocked up to Colonial looking like an absolute beast and it sent golf fans on Twitter wild. DeChambeau was swinging faster than we'd ever seen before and with that much muscle behind the ball, he was launching bombs off the tee.

Heading in to the Charles Schwab Challenge, DeChambeau ranked 3rd in Strokes Gained off the tee (+1.01) and 1st in Driving Distance, averaging 321.3 yards.

There's no doubt that driving distance will increase in the weeks to come, after seeing how far DeChambeau was hitting some of his drives on Thursday, with his drive at the 11th hole reaching 354 yards.

DeChambeau's extraordinary speed is clearly helping him out on the course and now that he has the swing under control, there's no doubt he's going to be even more of a threat on the PGA Tour.

The reactions circulating Twitter after seeing DeChambeau's impressive size were priceless, so check out some of the best below.

Live look at Bryson DeChambeau on Sunday after he misses a tap in birdie putt for the win pic.twitter.com/rMU2S0K1EJ

Bryson Dechambeau has clearly been quarantining with Brock Lesnar for the past 5 months pic.twitter.com/Pw03ydBZJB

Bryson Dechambeau looks like one of those Pokemon after they've evolved pic.twitter.com/D3YTGQv7lP

The @PGATOUR is back.

You vs. The Bryson DeChambeau She Told You Not To Worry About pic.twitter.com/sOkY0b7bNd

Bryson DeChambeau looks like he's eaten a gorilla during lockdown