Did Brooks Koepka just suggest that Bryson DeChambeau is on steroids? 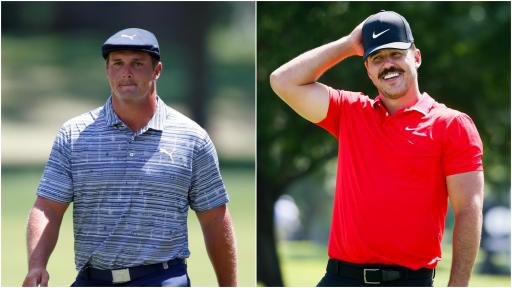 Bryson DeChambeau and Brooks Koepka have always had a fairly rocky relationship, with the two clashing on more than one occasion in the past and it seems we could be about to witness a third chapter in their story.

After adding 30 pounds of muscle during the 91-day break from the PGA Tour, DeChambeau is the most talked about golfer on the planet right now and you can understand why.

The 26-year-old has been hitting absolute bombs off the tee recently and during his victory at the Rocket Mortgage Classic last week, DeChambeau averaged a driving distance of 350.6 yards.

Seeing DeChambeau for the first time in three months at the Charles Schwab Challenge, golf fans around the world were shocked to see how much size the 'Mad Scientist' had put on.

Drinking around seven protein shakes a day, DeChambeau revealed that he is consuming roughly 3,500 calories a day to help him build his size and power, but it seems some people have a few other ideas as to how he's piling on the pounds.

Koepka, who has had run-ins with DeChambeau about his slow play antics in the past and also clashed in a strange argument about who had the better abs, decided to poke the bear by tweeting a Kenny Powers GIF about steroids.

Now Koepka didn't actually directly tweet the GIF to DeChambeau, nor did he say it was about him, but I think we all know there's only one person this could have been aimed at.

With thousands and thousands of retweets and likes, it didn't take long for Koepka's tweet to go viral and hundreds of golf fans and even golfers themselves have responded to Koepka.

Check out some of the top responses below, or click on Koepka's original tweet to see more.

Brooks is always salty when he knows someone is better than him AND bigger than him.

I mean this when I say, if they somehow don't pair Brooks and Bryson next week, then I *truly* have no idea what we're doing here.

DeChambeau after he takes 5 minutes to line up an 8 footer and misses pic.twitter.com/bvpJgUwQH1

1st thing comes to mind this is great for golf. Good old fashioned nasty rivalry almost NASCAR/NFL like.
Secondly Bryson and Brooks need to put on the gloves and Pay per view the boxing match. Make a 100 million dollars each Money Mayweather style.

top five in the fedex cup...PLACE AT THE TABLE! pic.twitter.com/q5FGPyN7kE