Jason Dufner tweets his take on a cold putter on the closing three holes at Sawgrass. 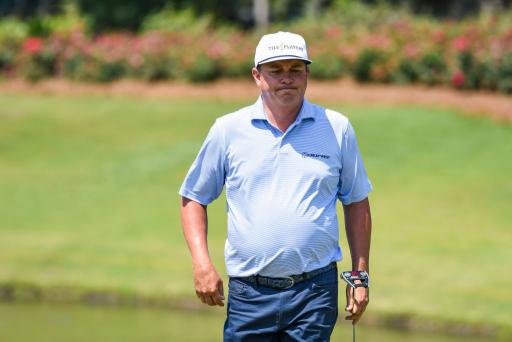 Jason Dufner may have walked away from TPC Sawgrass with $418,000 in his back pocket after finishing tied fifth at The Players on Sunday, but he squandered the chance of much more with three-putts from 20 feet at both the 16th and 18th holes.

Webb Simpson may have collected a whopping $1.98 million for his four-stroke victory, but a solo second was still worth a staggering $1.188 million.

Dufner looked in great shape for a runner-up spot, tied with Jimmy Walker in second as he stood on the par-5 16th green after finding the dancefloor in two strokes, but the American's putter did not cooperate on the closing three holes.

@JasonDufner with a little yippidy do da on 18....oh if he could putt he would be dangerous. pic.twitter.com/VICrtiPGu1— Steve Scott (@sscottpga) May 13, 2018

The 2013 US PGA champion three-putted from 20 feet for par at the 16th, then missed a delicate six-footer for birdie at the island green 17th. He then fired his approach to 20 feet at the final hole, a putt that would have taken him into solo second, but he went on to three-jab once more, missing his par attempt from the best part of three feet.

But despite some stick he took for his yippy miss at 18, Dufner, arguably one of the most laidback golfers on the planet, tweeted he's not losing any sleep over it...

Everybody also wants to talk about the money thing.. I won’t miss it, bc it was never mine... we earn our money each and every week, nothing is given to us until that final hole is completed. #momoneymoproblems— Jason Dufner (@JasonDufner) May 14, 2018