Johnson leads with two rounds to go at East Lake as he goes in search of first FedEx Cup title... 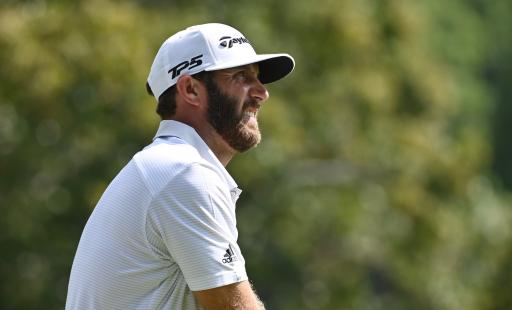 Dustin Johnson might not have brought his A-game to East Lake so far this week, but the big-hitting American still leads by one stroke with two rounds to go at the Tour Championship.

Johnson, who started the week at 10-under par in the staggered start, added a second-round 70 to his opening 67 to move to 13-under par and one stroke clear of Sungjae Im, who posted a superb 64.

Get caught up on the Round 2 @PlayoffFinale action in The Takeaway. pic.twitter.com/lJ0eQUpqJ5

Incredibly, Johnson found just two fairways on Saturday as he exchanged four birdies with four bogeys in a lacklustre round.

Xander Schauffele moved up to 11-under par following a 65, with Justin Thomas back on 10-under par after a 71.

US PGA champion Collin Morikawa (65) lurks at 9-under par alongside England's No.1 player Tyrrell Hatton (66) and Jon Rahm, who posted a dismal 74.

Rory McIlroy, who became a father for the first time earlier this week, made a mess of the par-5 18th when topping his ball out of the heavy rough and into the water en route to a bogey-six.

McIlroy is bidding to become the first player to win the FedEx Cup three times but he has it all to do at 8-under par with 36 holes to go.

<
Previous
Would you use this golf JETPACK if you could?
>
Next
Golfers need an email address if they want a handicap
Latest News
Golf news
Bryson DeChambeau muscles his way into final 64 of PLDR after facing LIV critics
Golf news
Did you know about this "LEAF RULE" ahead of your autumn and winter golf?!
Equipment news
Best Golf Putters 2022: Buyer's Guide and things you need to know
Golf news
Bryson DeChambeau arrives for Pro Long Drive World Championship in Nevada
Equipment news
Guido Migliozzi: What's in the bag of the Cazoo Open de France winner?
Latest Reviews
Irons
Caley Golf Iron Set Review | Is this the best value iron of 2022?
Putters
Zebra Putter Review | "One of the most popular golf products ever!"
Wedges
A Spin MACHINE! Callaway JAWS Raw Golf Wedge Review
Wedges
Their BEST Yet?! TaylorMade Hi-Toe 3 Golf Wedge Review
Footwear
Duca Del Cosma Churchill Golf Shoes | Best Golf Shoe Review
Equipment Reviews
Equipment
FootJoy's Blues Collection is perfect for your game this summer!
Equipment
Peter Millar have an AMAZING selection of golf shorts!
Equipment
The BEST PUMA golf polo shirts as seen on the PGA Tour!
Equipment
The BEST Nike Golf shirts as seen at the PGA Championship
Equipment
NEW VICE Pro Drip Silver Hills Golf Balls: Limited Edition
Latest Tips and Instruction
Tips and Instruction
DP World Tour pro Hurly Long and his meditation technique...
Tips and Instruction
Learn how to chip like a winner on the DP World Tour!
Best tips and instruction
What can we learn from Jordan Spieth's new pre-shot routine on the PGA Tour?
Tips and Instruction
How to NEVER MISS another short putt with Manolo Vega!
Tips and Instruction
Sergio Garcia tells Me and My Golf GREAT driver tip: "Pull the chain!"