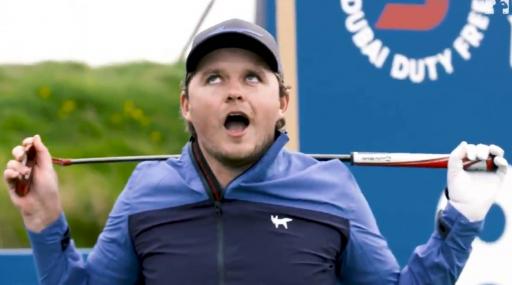 There are certainly some very strange trophies out there to be won in golf and the latest prize on the Staysure Tour was too easy a target for Eddie Pepperell, the king of Twitter.

Pete Fowler shot a three-under-par final round of 67, to finish the MCB Tour Championship Seychelles at four-under, to claim his seventh seniors tour title.

Fowler turned 60 earlier this year and believes he needs to focus on his fitness if he is to continue to have success on the Staysure Tour.

“The golf ball doesn’t know how old you are. Since I’ve turned 60, I’ve said that I still need to work hard,” Fowler told European Tour Media.

“If you look at Bernhard Langer and the other senior guys who are doing well around the world they continue to work hard on their fitness. That’s important for us because our fitness is dropping, but I’m trying to keep mine up there.

“I’ve proved over the last 10 years that your fitness is key to success.”

Fowler's prize for victory was the MCB Tour Championship trophy, inspired by the coco de mer, the Seychelles nut, but you can't help see something else when you look at it.

Once an image of Fowler holding the trophy was put out on Twitter by the official Staysure Tour account, Eddie Pepperell - well known for his Twitter antics - couldn't resist the temptation.

One of the greatest trophies I’ve seen. Congrats Peter. Did you have to think extra carefully about where you kissed it before holding it aloft? https://t.co/knWyu44kRJ

Plenty of golf fans saw Pepperell's tweet, which has already amassed close to 3000 likes, and it sparked an onslaught of funny comments about the trophy.

He’s gonna have a fun night celebrating with that trophy that’s for sure!

If Peter was a pirate, I would say he “won the booty”.