Europeans land their first ever clean sweep in a foursomes session at the Ryder Cup. 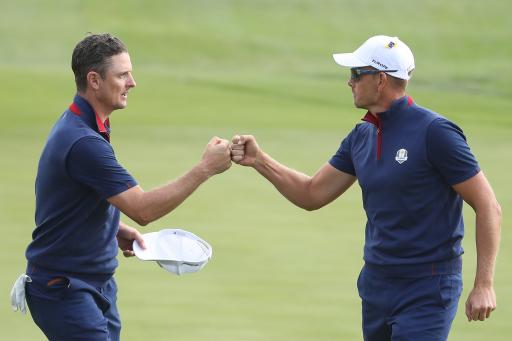 Europe eradicated their 3-1 Friday morning fourballs defeat with a 4-0 whitewash in the afternoon foursomes to move 5-3 ahead going into the weekend at the Ryder Cup at Le Golf National.

The 4-0 drubbing marks the first time the Europeans have ever landed a clean sweep in a foursomes session at the Ryder Cup.

Justin Rose and Henrik Stenson took care of Dustin Johnson and Rickie Fowler, who won their opening game in the morning, with a comfortable 3&2 victory, and then Rory McIlroy was joined by Mr Ryder Cup, Ian Poulter to defeat Webb Simpson and Bubba Watson 4&2.

Sergio Garcia may have received a bit of stick for earning a wildcard pick but he repaid Thomas Bjorn's faith in him by joining Alex Noren and trouncing an out-of-form duo of Bryson DeChambeau and Phil Mickelson 5&4.

Tommy Fleetwood and Francesco Molinari defeated Tiger Woods and Patrick Reed in the morning, and were sent out again to take care of Jordan Spieth and Justin Thomas 5&4.

Fleetwood and Molinari are the only players with two points so far.