Rory McIlroy fails to make a single birdie in the morning fourballs as USA move 3-1 up. 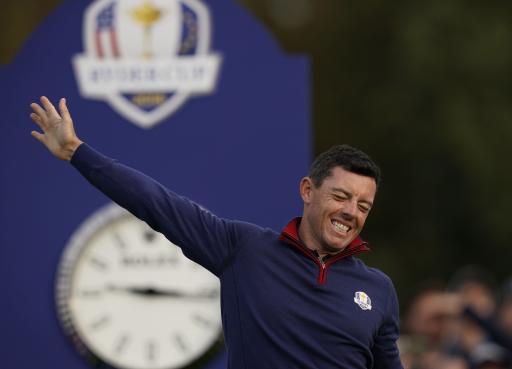 United States have taken the early lead in the 2018 Ryder Cup with an impressive performance in the Friday morning fourballs, with Tiger Woods and Patrick Reed the only losing American duo.

Dustin Johnson and Rickie Fowler didn't have their best games on show but they still managed to see off Rory McIlroy and Thorbjorn Olesen with the minimum amount of fuss and put the first point on the board for the stars and stripes with a 4&2 win. McIlroy was the only player of the morning wave to not make a single birdie.

Justin Rose and Jon Rahm were well in control of their match around the turn but stumbled thereafter with a number of mistakes from both players, compounded by Rose finding water with his approach to the final hole, and Brooks Koepka and Tony Finau stepped in on the final hole to land a 1up victory.

Justin Thomas and Jordan Spieth saw their 3 up lead on the front nine quickly erased by the 12th but the American duo responded well and edged ahead for a 1 up victory over English duo Paul Casey and Tyrrell Hatton.

Tommy Fleetwood and Francesco Molinari overturned a 2-hole deficit with a blistering final eight holes and they put the first European point on the board with victory over Woods and Reed.

Woods looked a little uneasy for much of the round, and he has been dropped, along with Reed for the afternoon foursomes.

Much to the delight of European fans, Ian Poulter is included for Thomas Bjorn's side.