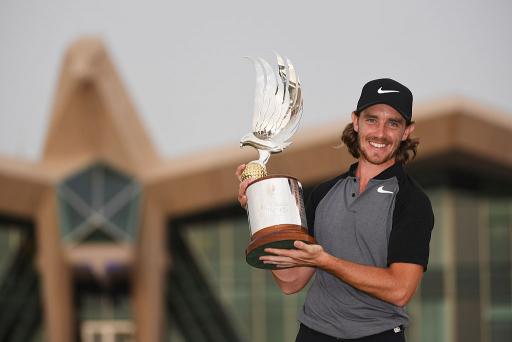 Nike athlete Tommy Fleetwood celebrated turning 26 on Thursday, and ended the week celebrating the biggest title of his career with victory at the Abu Dhabi HSBC Championship, seeing off a star-studded field in the process.

The Southport-born star had finished second three times since his maiden Tour win at the Johnnie Walker Championship at Gleneagles in 2013, but drew on those experiences to go one better in the United Arab Emirates.

A closing back nine holes of just 31 strokes on Sunday, including a chip-in eagle at the 10th, saw him finish atop the leaderboard on 17-under, one stroke clear of Dustin Johnson and Pablo Larrazabal.

Fleetwood sealed the deal with a superb 3-wood from out the left rough to the par-5 18th, which flew close to 270 yards onto the front of the green.

Two putts for birdie from there was enough to land the spoils and end 41 months of hurt.

"I’ve been playing well for some time now but to get the win and see off some of the best players in the world is a huge confidence boost to me," said Fleetwood, who led the field in GIR.

"I felt the second European Tour victory was a little bit overdue, but I’ve kept positive, working and improving and now thankfully I’ve earned that win."

The former Walker Cup starlet kept cool in the heat of the United Arab Emirates in a selection of apparel from the Nike performance range, including the Nike Raglan Polo.

The win marks the culmination in a significant return to form for Fleetwood, who has now finished in the top-20 in 10 of his last 14 starts on Tour.

TOMMY FLEETWOOD IN THE BAG