Even Gary Player's son believed his father should have declined the Medal of Freedom... 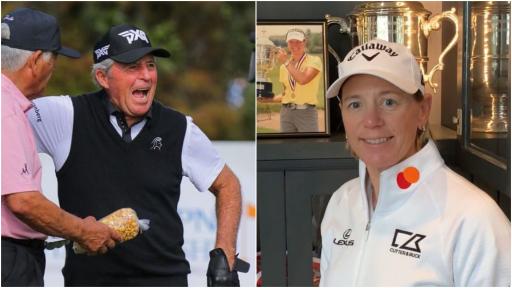 Gary Player and Annika Sorenstam have been slammed by golf fans around the world for standing beside Donald Trump at the White House to accept the Presidential Medal of Freedom, just a day after hundreds of his supporters stormed the US Capitol building, to which he responded by telling them "we love you, you're very special".

Golf fans were infuriated to see Player and Sorenstam accept an award from Trump and believed that both of them should have declined the medal, an opinion that was even shared by Player's own son.

There's no denying that what Sorenstam, 50, has accomplished for the women's game is nothing short of extraordinary, but accepting an award from a man who most deinitely does not share her views on gender equality will now tarnish her name.

Player on the other hand, who turned 85 in November, is without a doubt one of the greatest golfers to ever grace the game, but this is not the first time he has been in the firing line for his political views.

The ceremony held for Player and Sorenstam was not open to the public and was held in secret and prior to receiving their medal, Player's son Marc, who is heavily involved in the golf industry, tweeted that he wishes his father would simply decline the award.

"I wish my father would simply & politely decline this “award” at this time. Tone deaf. In denial. Wrong!!" tweeted Marc on Thursday.

I wish my father would simply & politely decline this “award” at this time. Tone deaf. In denial. Wrong!!

Marc's view was of course shared by thousands, with golf fans from all over the world slamming Player and Sorenstam for their actions.

Shame on Annika Sorenstam and Gary Player. They chose to accept the Medal of Freedom from Trump — to be seen with him and stand with him — the day after his words and actions launched the deadly and appalling attack on the US Capitol. My @usatoday column: https://t.co/r7Ar8V32yj

Hey look, golfers were the first back in the Oval Office. Trump's freedom ceremony for Annika Sorenstam, Gary Player and Babe Didrikson Zaharias actually went ahead today. Sympathies to Zaharias. Shame on the other two who are still alive and had the choice to say "up yours"

Annika Sorenstam @ANNIKA59 and Gary Player @garyplayer should refuse to accept the Presidential Medal of Freedom today from the man who incited an insurrection yesterday.

This was a fucking joke. A perfect splash of negativity for the sport of golf amongst the carnage of Trump’s presidency and the bloodshed of the previous day.
Everyone involved should be ashamed of themselves. https://t.co/gQxuwSzNJZ

Yeah no longer an Annika Sorenstam fan. Very disappointed in her for accepting this after what happened yesterday.