Paul Waring hit one of the shots of the day during the opening round of the Scottish Championship and golf fans went crazy for it on social media. 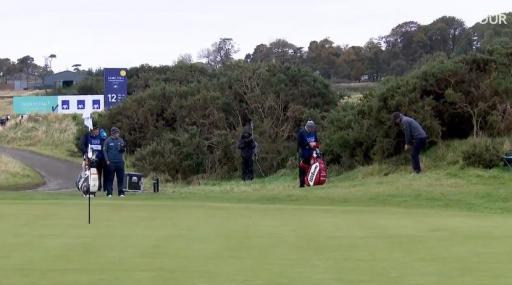 Paul Waring stunned golf fans watching the Scottish Championship on Thursday, after he opted to use a driver for his second shot on a par-3, coming out of the rough and onto the green.

I've always been taught to be creative when it comes to golf, especially around the greens. Sometimes I'll pull a wedge out my bag and try to spin it at the hole and sometimes I'll go with a mid-iron for the bump-and-run, but I can honestly say I've never used a driver to chip out of thick rough.

The 11th hole at Fairmont St Andrews is a challenging par-3 and Waring looked as though he was in a spot of bother after his tee shot found the thick stuff, but no one could quite believe their eyes when he approached his shot with his driver in hand.

What followed was easily one of the best shots of the day, as Waring took a short back-swing, hitting the ball into the ground, making it pop into the air and roll onto the green to leave a short putt for par.

Amateur golfer CHASED BY SNAKE on the tee box as his pals laugh uncontrollably
Golf rules: Are you allowed to BALANCE on one foot then walk through the stroke?

Watch the incredible shot in the video below:

Chipping with a driver from the rough

Waring went on to shoot a 4-under par opening round of 68 and has got off to a solid start on Friday.

The video of the shot on the European Tour's Twitter account received multiple comments, with many golf fans asking why Waring opted to use his driver and he was happy to explain.

To be fair I didn’t have a backswing because of the gorse and a massive clump of fescue rough behind the ball. I’ll show you that one one day! https://t.co/Q3mSy3NFRK

NEXT PAGE: European Tour cameraman FALLS OVER during interview at Scottish Championship

latest golf news
european tour
european tour news
paul waring
paul waring shot
scottish championship
Previous
Golf Tees: Plastic or Wooden - which ones do you use on the course?
Next
Tiger Woods will NOT take part in 'The Match III', but Phil Mickelson will