Collin Morikawa hit one of the greatest bunker shots you'll ever see during the Tour Championship. 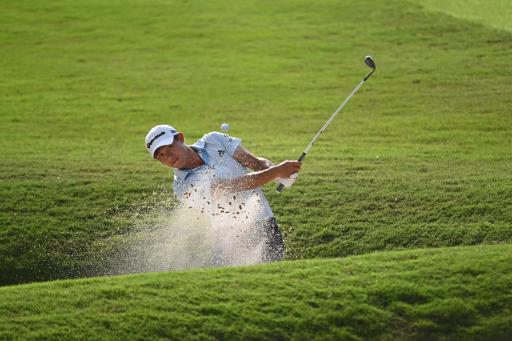 Golf fans are going crazy on social media after Collin Morikawa pulled off one of the greatest bunker shots in PGA Tour history during the third round of the Tour Championship on Sunday.

Recent PGA Championship winner Morikawa arrived at a greenside bunker to see every amateur golfers' nightmare, a ball plugged deep into the sand.

Not only was the ball plugged, but it had also buried itself in the slope of the bunker, leaving Morikawa with an awkward stance and an extremely difficult shot, one where most of us would probably fall backwards and leave the ball in the sand for another go.

The 23-year-old showed his class and proved why he is one of the most exciting players on the PGA Tour right now. Watch the incredible shot from Morikawa below:

Plugged in face of the bunker ... no problem for @Collin_Morikawa. #QuickHits pic.twitter.com/QzEv5Qlynn

The World No.5 is currently in fifth place at East Lake heading into the final round of the Tour Championship, seven-strokes behind leader Dustin Johnson.

The gap is too far for Morikawa to close, but the epic bunker shot quickly became the hot topic between golf fans on social media. Check out some of our favourite responses below.

"That was possibly the greatest bunker shot I have ever witnessed. Take a bow Morikawa."

"WOW! How on earth did he do that?! Insane talent."

"Morikawa just made one of the most difficult bunker shots look like a piece of cake."

"Future World No.1 in the making. This guy is on a different planet."

"Shot of the week? More like shot of the season!"

"How the hell did he do that?! Collin Morikawa you are ridiculous!"