Colin Montgomerie and Billy Andrade took part in the #DreamsChallenge and golf fans are loving it. 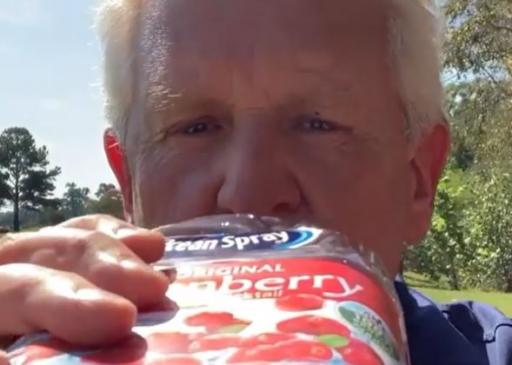 Colin Montgomerie and Billy Andrade have won over golf fans on Twitter after they took part in the Dreams Challenge that has been going viral on social media.

The challenge started after a video went viral of a man on a skateboard singing along to Dreams by Fleetwood Mac whilst drinking a bottle of Ocean Spray juice.

Millions of people have watched the video and Ocean Spray even bought the man a new car as a thank you for making the drinks brand one of the most talked about companies in recent weeks.

With the social media challenge in full swing, the PGA Champions Tour decided to get two of its players involved and Montgomerie and Andrade were happy to take part.

Watch the two golf veterans attempt the challenge in the video below:

We were even treated to a bloopers video, where Montgomerie was getting a few directions of how he should be holding the bottle.

More collabs in the future? pic.twitter.com/kRtpwQDLmR

Golf fans flooded the comments on both Twitter and Instagram and were absolutely loving the challenge attempt from the two Champions Tour players, who this week play in the SAS Championship at Prestonwood Country Club.

"I am not able to put my finger on it but this challenge is addictive and amazing."

"Colin and Billy gettin down..."

"Hard to describe how much I loved that!"

"Go on Monty ya lad ye!! Any chance of getting you back on sky? The masters coverage needs you!"