It seems some golf fans were less than impressed with the Driving Relief charity skins match. 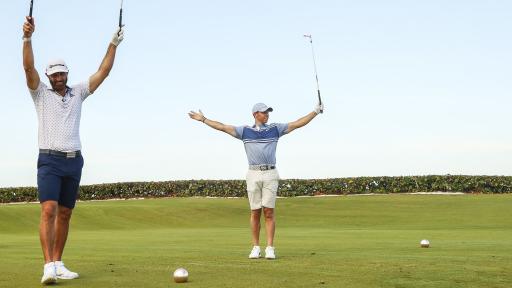 The TaylorMade Driving Relief charity skins match marked the return of live golf to our televisions, after we were all left very disappointed when The Players Championship was cancelled after one round to help to slow the spread of the coronavirus, but it seems some golf fans weren't too happy with what they watched on Sunday.

No one promised that the event was going to be the event of the year, but what it did promise was that it would raise a serious amount of money and awareness for the American Nurses Foundation and CDC Foundation, two organisations helping to lead COVID-19 relief efforts, which is exactly what it did.

Everyone wins today. With the support of UnitedHealth Group, we were able to raise over $5.5 million (and counting!) for the American Nurses Foundation and CDC Foundation. Thank you to all of those supporting #DrivingRelief! Don’t miss your chance to donate by hitting the link in our bio. Donations can continue through May 19. #GolfIsBack

Over $5.5 million raised and I for one enjoyed watching professional golfers back on the course in a slightly different format where they were allowed to wear shorts, had to carry their own bags and gave each other a bit of stick from time to time.

Scrolling through golf Twitter during and after the Driving Relief match, which Rory McIlroy and Dustin Johnson ended up winning, it seemed that although most people enjoyed the viewing, there were also a large proportion complaining about the event.

So take a look below at a collection of the negative reactions to the event, which saw some people complaining about the quality of golf and some about the way in which it was broadcasted...

Are we the only people that think that #golf game yesterday was lame! Total rubbish. #DrivingRelief #trash

Have to say, this golf “match” is absolutely shite @SkySportsGolf Can we actually hear some of the conversation between players or do we have to put up with Bill fecking Murray!!! #DrivingRelief #uttershite

These dudes suck..
I could play better than this.. #DrivingRelief

Just turned it off #DrivingRelief

Too much commentary, not enough players mic audio #DrivingRelief

Please stop the interviews w celebs and just give us golf! I didn’t wait to listen to Bill Murray and Mike Tirico talk about their golf game! Who greenlighted that idea. Fans want golf and pga players! Not interviews! #DrivingRelief

Nice to see live golf again last night but only lasted a hour I was so bored! Ryder Cup with no fans would be a disaster. #DrivingRelief pic.twitter.com/jWvySXJ5cV

Great that #DrivingRelief raised so much money, despite the fact the entire event was extremely boring as well as an unspectacular display of golf. https://t.co/5lIVs9riSR

@TaylorMadeGolf driving relief was just awful. So boring. I would of rather 4 fun golfers out there chirping the shit outta each other with side wages and just real personality. It was to serious. The commentators sucked ass as normal. Blah golf needs a boost it's so dry.