Rory McIlroy couldn't help himself after Matthew Wolff attempted to put him off his putt... 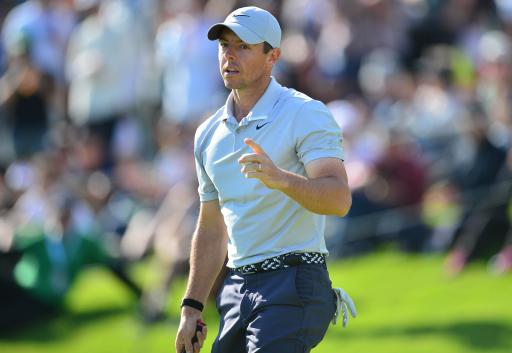 Rory McIlroy and Dustin Johnson are currently taking on Rickie Fowler and Matthew Wolff in the TaylorMade Driving Relief Skins Match, raising millions of dollars for charities in the fight against the coronavirus.

Supported by UnitedHealth Group, McIlroy, Johnson, Fowler and Wolff are battling it out for over $3 million, with every cent going towards the American Nurses Foundation and CDC Foundation, two organisations helping to lead COVID-19 relief efforts.

RELATED: WHAT'S IN THE BAG - McIlroy, DJ, Fowler and Wolff

With all four players wearing microphones during the skins match, we've been treated to some interesting insights into the minds of these four superstars and the banter between the two teams has certainly been entertaining.

Wolff, currently ranked 110th in the world rankings, is believed to be destined for glory in his future and it didn't take long for the youngster to try and get in the head of the world No.1.

On the second hole, McIlroy had a putt for par that he needed to make to halve the hole and role the skin over to the next and Wolff did his best to put the Northern Irishman under some pressure.

As McIlroy approached his putt, Wolff warned the current best golf on the planet that if he misses his putt he'll lose the hole and it will cost him and DJ $50,000.

So when McIlroy rolled his putt into the middle of the hole, he decided to remind the 21-year-old that he's faced a few pressure putts in his past. Watch the brilliant comeback from McIlroy below: