Golf sent me to the Emergency Room

We hear from some GolfMagic readers who ended up in the emergency room from golf injuries. 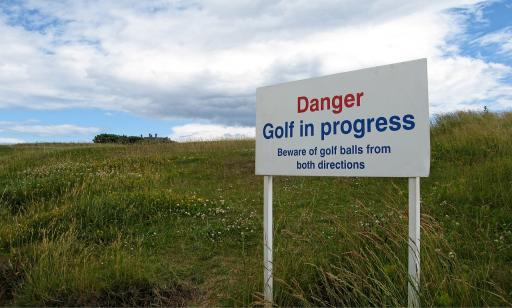 You wouldn't think golf is a very dangerous sport, given that there's absolutely no contact involved whatsoever, but that doesn't stop some pretty nasty injuries occurring once in a while.

There's a reason you're told to shout 'FORE!' if your ball is flying towards someone and hopefully when you are forced to shout a warning, the nearby group hear you and cover their heads to avoid the danger.

After a GolfMagic staff's member of family suffered an injury whilst playing golf in January, we decided to dig a little deeper and see what other injuries our readers had experienced on the golf course and some of the replies were shocking!

Thank you to all of you who got involved, we really appreciate everyone getting in touch. Check out four of the worst injuries we heard that sent golfers to the emergency room.

Due to legal reasons we will not be disclosing which golf clubs the injuries took place at.

"I was playing in my weekly fourball with my mates, same group every week and we absolutely love it.

"Gives us a chance to sneak away from the wives for a few hours, have a good laugh and then enjoy a pint once the poor show of golf is all over.

"So we were on the back nine, a par-4 with deep rough out to the right and of course that's exactly where I put my ball, I seem to go there every time and never learn my lesson.

"I was searching for my ball and suddenly my foot went straight down a rabbit hole that was hidden by the long grass. I toppled over and my mates were in hysterics, but they soon realised I was in a lot of pain.

"One of the club professionals came and got me and took me back to the club house and I clearly needed to go to the ER. Turns out I had broken my ankle and I was in a cast for six weeks! At least I finally learnt my lesson, I take an iron on that hole now to stay away from that rough."

"He's bombed his drive down the fairway and as I'm watching his ball in the air, his tee has flown backwards and caught me in the eye.

"Honestly, I thought I'd gone blind. One of the worst pains I have ever experienced. He drove me straight to the emergency room and after seeing a doctor they said it was a corneal abrasion.

"Luckily it healed and I still have complete vision, but the doctor said it very easily could have punctured my eyeball and caused me a serious problem."

"Me and my wife were out playing nine holes together. The hole was a par-5 and quite a hilly one, so there are bells in place to let the group behind you know that you're clear.

"We were just walking down the bottom of the hill, the bell must have been about 20 yards in front of us but my wife was yet to hit her next shot.

"Out of nowhere, I felt a knock to the back of my head. The next thing I knew I was looking up to the sky with my wife sitting by my side and she was in a right state.

"A group of lads from a nearby hole came over to help. It turns out the group behind us hadn't waited for us to ring the bell and one of their balls smacked me in the back of the head.

"We went to the hospital as I'd been knocked out for about five minutes so I needed to get a check up. Thankfully, apart from a big lump to the back of my head I got away pretty unscathed!"

"This is one of those stories that doesn't stop being thrown about between my mates and I laugh about it now but at the time, f*** did it hurt!

"We hadn't even started our round yet, me and the lads were on the first tee all laughing and joking, like we do most Saturdays.

"My pal had his driver in his hand and without looking who was around him, took a wild practice swing which happened to bosh me straight on the nose!

"You didn't need a doctor to tell me that it was broken that's for sure. It was completely bent and the blood looked like a murder scene, it was absolutely gushing down.

"I was more p*ssed off that I didn't get to play! Anyway, one of the boys took me straight to the emergency room and surprise surprise, a broken nose."