Golf trolley ends up in the WATER during collegiate tournament

College golfer loses her 9-iron and her mobile phone as her push trolley ends up in a lake. 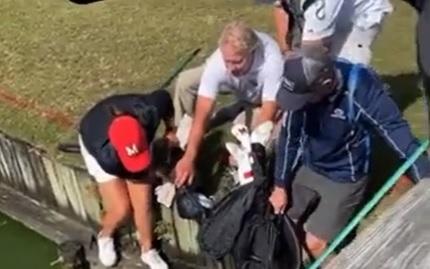 A lady golfer struck her birdie putt from 10 feet narrowly past the cup and then saw her push trolley fly into a water hazard during the Landfall Tradition collegiate tournament last week.

Maryland's Karla Elena Vazquez Setzer was delighted with her tee shot at the par-3 2nd hole, but as she putted out things took an immediate turn for the worse as she looked to the side of the green.

With winds gusting up to 35mph, in similar fashion to what we saw in Bermuda on the PGA Tour last week, Vazquez Setzer's trolley had a mind of its own and travelled straight into Dye Lake as she was about to tap home for par.

Judging by the video below, Vazquez Setzer, her playing partners and volunteers all quickly ran over to the lake as the trolley found its way into a watery grave.

@karlavs_ shoots 72 (E) during round one after high winds blow her golf bag into a lake. She's currently T12 headed into the second round.

She went on to make BIRDIE the next hole!

The trolley was eventually recovered and thankfully saved, however, the 9-iron went missing along with her mobile phone.

Just as luck had it, Vazquez Setzer needed a 9-iron for her approach shot at the next hole, but to her credit, she gripped down on an 8-iron and went on to make a birdie at the hole - marking the first of three over her next five holes.

Given the circumstances, she went on to finish with a respectable round of level-par 72.

NEXT PAGE: IS THIS THE MOST DANGEROUS GOLF GAME EVER INVENTED ON THE COURSE?!