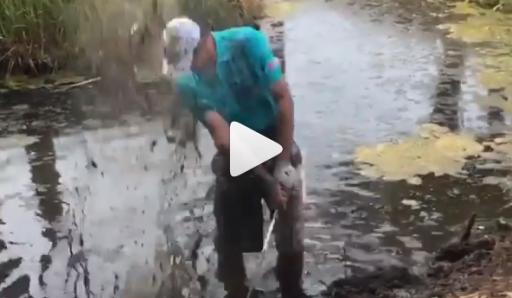 Len Mattiace might best be remembered for making a mess of a Masters playoff between he and Mike Weir in 2003, but his latest bizarre golf video will probably end up rivalling it.

Covered in mud, Mattiace reveals his best advice for when playing from water...

Mattiace shot a 65 in the final round of the 2003 Masters which put him into a playoff Weir, but on that first playoff hole - the 10th hole at Augusta - the American found himself stymied by trees when his approach drifted offline. Weir needed only a bogey to secure the victory and his sole major title.

Shortly after the 2003 season, Mattiace's career was threatened by a skiing accident and torn ACLs in both knees.

Mattiace was ranked as high as 24th in the Official World Golf Ranking, but was not fully exempt on the PGA Tour after 2005.

Tips and Instruction
Manolo Vega teaches us how to hit a draw in QUICK STYLE
Tips and Instruction
Perfect your ball position with these GREAT GOLF TIPS
PGA Tour
Bryson DeChambeau shares valuable tips on how to vastly IMPROVE your short game
Driving
Best golf tips: Use these three headcover drills to greatly improve your driving
Tips and Instruction
Best Golf Tips: How to stop slicing your driver using the HEADCOVER DRILL