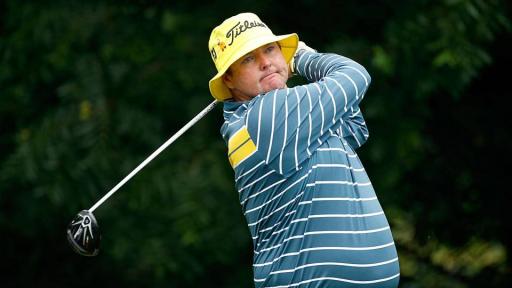 Jarrod Lyle’s ongoing fight with acute myeloid leukemia took another sad turn this week when the former PGA Tour player announced via Instagram that he has been placed in “palliative care.”

“Earlier today we started palliative care for him as his body is no longer able to fight. We will take him closer to home to be near his girls. He has put up a courageous fight and he is surrounded by love.”

This will be the final post on Jarrod’s page. Earlier today we started palliative care for him as his body is no longer able to fight. We will take him closer to home to be near his girls. He has put up a courageous fight and he is surrounded by love #fuckcancer

Lyle, 36, was diagnosed with leukemia for the third time last year and in December underwent a haploidentical transplant and stem cell therapy back in his native Australia, but his recovery was slowed by a mystery illness that resulted in a loss of vision.

He was first diagnosed with leukemia as a teenager, but he earned his Tour card in 2007. In 2012, Lyle’s cancer returned, but he was declared cancer free the next year and returned to the Tour.

Although Lyle failed to retain his Tour membership in the United States, he returned to Australia to continue competing and started working as a television analyst.

Palliative care is described as specialised medical care for those with serious illness to help relieve symptoms and stress and improve quality of life.

A number of PGA Tour professionals, and even 'The Rock' Dwayne Johnson pay tribute to the strength and courage of Lyle and his family on social media...

Man this is a tough one.
Sending so much love, light and strength to Jarrod and his Lyle family. https://t.co/GOiT34HwuK

Thoughts with Jarrod, his family and friends pic.twitter.com/vsRzVd0ju3

Just heard the news about Jarrod Lyle. Life is very precious and you have been so strong. We are thinking and praying for you and your family now more than ever. - Ernie, Liezl, Samantha and Ben

Jarrod has fought with the heart of a lion, always with dignity and a smile surrounded by his loving family. We Love You...please rest peacefully knowing how inspirational and beloved you remain in all our hearts. https://t.co/DCR8rZEoN6

Life is precious and we all take it for granted too often - seeing the picture of @jarrodlylepga hugging his family with not long to live brought tears to my eyes. Peace be with you, you will be missed Jarrod x

Thank you for being an inspiration @jarrodlylepga. Your bravery and strength has been so admirable and we all salute you. Please know that your journey hasn’t been alone, thinking of you and the family