PGA Professional Luke Willett played three rounds of golf in under three hours in support of the national charity, the Golf Foundation. 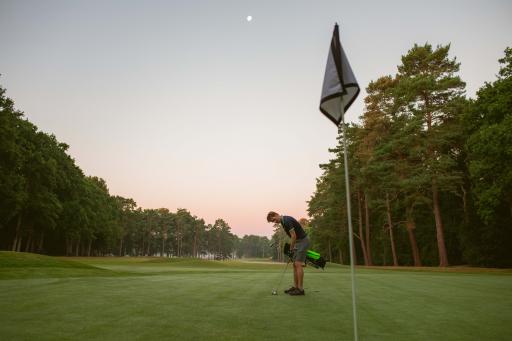 Luke’s fantastic performance was part of his continued fundraising at https://bit.ly/2lFLQbS so that the Golf Foundation can offer life changing opportunities to young people through golf. Luke’s fitness levels and ‘can-do’ attitude are also a great advertisement for all the health benefits of this game.

Golf Foundation Trustee Nick Bragg was on hand to encourage Luke during his final round and to thank him for his amazing work. Luke said of his experience: “Creating a little piece of history is a lot of fun. 54 holes, all played on foot, carrying clubs including running the roads between the courses. This to me sounded like a challenge that suited me down to the ground.

“Starting at the crack of dawn, the transition from night to day was something to behold. Not only was it a great day but it was one of the hottest on record. This whole transition unfolded with just me and the course – plus a few deer out there.

“Amazing to think when I finished I felt like it must have been midday given how much had happened, yet it was still before 8am. I strolled out from the clubhouse to grab my clubs, where there were a couple of members hovering ready to play their rounds. As I approached I was asked how I was getting on and if I had finished my first round. When I said I’ve just completed all three rounds, they were speechless!”

Following this latest performance, Luke promises an “amazing golfing adventure”, with running, swimming, climbing and golfing over fells, mountains, and across water in late August (subject to regional rules over Covid-19). As a clue to its difficulty, Luke has run nine marathons in the last nine weeks, and this is only the training for his adventure challenge to come to support the Golf Foundation.

Last year, Luke raised funds for the Foundation via #TheGreatBritishOpenChallenge, when he cycled 830 miles around much of the UK to play all 14 of The Open’s historic golf courses, carrying his four golf clubs on his bike in all weathers, in just 10 days.