Golfer THROWS CLUBS IN THE LAKE after enduring a nightmare round!

Golfer gets so fed up after his weekend round that he decides enough is enough... 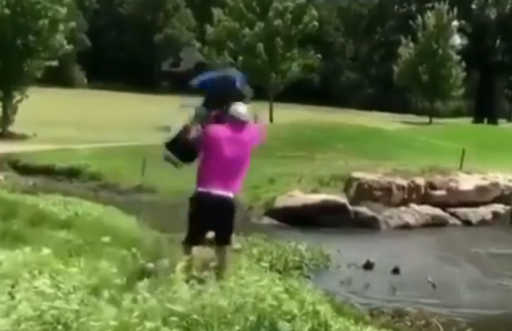 A video has gone viral over the Bank Holiday Weekend of a golfer hurling his golf clubs into the lake after enduring a nightmare round.

The post, which appeared on the Golf Gods Instagram page, shows a man pictured in a neon pink shirt walking off the back of the 18th green to send all of his clubs and the bag into the lake.

While we have no information on what score the gentleman shot,  we can only imagine his dream of one day competing on the PGA Tour took a serious nosedive over the weekend. We also can't be certain if he went in to retrive his clubs once cooling down.

Let's just hope he remembered to take his phone, keys and wallet out...

WATCH THE VIDEO TO SEE WHAT HAPPENED

Check out some of the best comments to the post below:

"Probably the white belt's fault for sure."

"He played because of that white belt, simple as that."

"Some people have too much money."

"I'd be diving in after all that... got my clubs at the thrift shop."

"I felt like doing this on Sunday, had a shocker of a round."

"It was at that very moment he realised he had messed up."

"We have all felt like doing this at some point in life."

NEXT PAGE: JUSTIN THOMAS HANDS HUGE CHUNK OF MONEY TO MIKE VISACKI TO HELP HIM WITH HIS GOAL OF PLAYING ON THE PGA TOUR