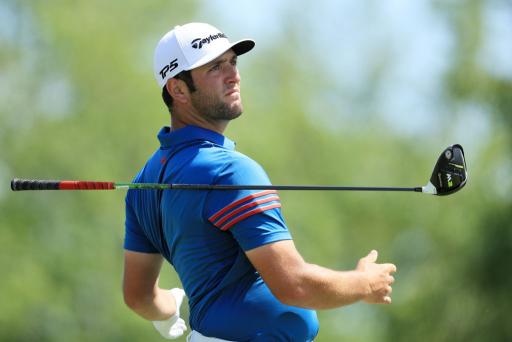 Jon Rahm has made a giant impression on the PGA Tour ever since turning professional this time last year, but he is going to need to cut the sort of immaturity he displayed at Erin Hills yesterday out his game very quickly.

Rahm, 22, was the number one amateur golfer in the world amateur ranking for a record 60 weeks and was the low amateur at the 2016 US Open at Oakmont.

Since turning professional after the 2016 US Open, Rahm has since gone on to bigger and better things with victory at the Farmers Insurance Open and a runner-up finish behind Dustin Johnson at the WGC Match Play - all of which has vaulted him up to world number 10.

But en route to missing the cut at this week's US Open on 5-over yesterday, the big-hitting Spaniard was regularly spotted losing his cool out on the course - as depicted by ESPN's Kevin Van Valkenburg who tweeted a play-by-play account on Twitter.

Of the worst incidents, Rahm bellowed an F-Bomb, punched the sign on the 15th tee, slammed and kicked a wedge, and tossed a bunker rake into the fescue.

Was standing near Jon Rahm a minute ago when he:1. Bellowed an F-Bomb2. Slammed his wedge3. Kicked it4. Picked it up & slammed it again— Kevin Van Valkenburg (@KVanValkenburg) June 16, 2017