Jon Rahm moves to World No.1 after Memorial win

Jon Rahm claimed the Memorial Tournament on Sunday to move to No.1 in the World Rankings for the very first time. 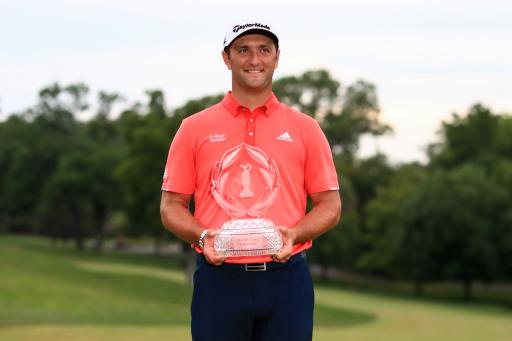 Jon Rahm claimed his fourth PGA Tour title on Sunday at Muirfield Village, beating Ryan Palmer by three shots to win the Memorial Tournament and move to No.1 in the World Rankings for the very first time.

Sunday's action took a turn when Rahm's 8-shot lead cut to three in just five holes, with the Spaniard also finding out about a 2-stroke penalty during an interview after the tournament.

It proved to be another difficult day at Muirfield with just five of the 74 players shooting under par, with Rahm finishing 3-over for his final round, leaving him 9-under for the tournament, with Palmer second at 6-under.

Rory McIlroy finished in T32, meaning Rahm's victory was enough to leapfrog the Northern Irishman into the World No.1 spot and become the first Spaniard to hold that position since Seve Ballesteros.

Rahm chipped in for what we all thought was an incredible birdie at the par-3 16th, after the 25-year-old missed the green with his tee shot, but he followed it up with a delicate chip shot that his hero Ballesteros would have been proud of, although that 2 would later become a 4 due to Rahm's ball moving as he put his club next to it.

The 17th and 18th proved no challenge for Rahm as he made par at the final two holes and was greeted by Jack Nicklaus, who designed Muirfield Village, where the two shared a brilliant moment together.

After congratulating Rahm on his win, his first since winning the Zurich Classic with Memorial runner-up Palmer in April last year, Nicklaus told the newly crowned World No.1 not to stop there.

"I'm proud of you, happy for you and get more. Get many, many more for you," said Nicklaus.