Phil Mickelson used his putter from 78 yards out and it sent golf fans into a spiral on Twitter. 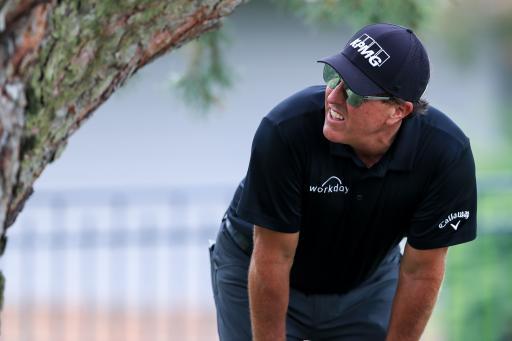 There's no doubt that Phil Mickelson is one of the most creative green-side players ever to grace the game of golf, but during the final round of the Memorial Tournament, 'Lefty' attempted a shot that left a lot of golf fans confused.

After piping a 364-yard drive down the middle of the fairway at the par-4 13th, Mickelson had just 78 yards to the flag where we thought we'd see a routine wedge shot from the 50-year-old.

Instead of pulling out one of his trusted wedges, Mickelson grabbed his putter and attempted a 234ft putt, which didn't exactly go to plan. Watch the shot in the video below.

“I saw that playing out differently in my mind.” A classic @philmickelson par at Memorial featuring putter from 78 yards followed by a nasty flop shot.

“I saw that playing out differently in my mind," Mickelson said after seeing his ball trickle along the fairway and not even reach the green.

Leaving his lengthy putt short of the dance floor, we expected Mickelson to stick with the putter but he surprised us again and flopped a wedge high into the air before tapping in for par.

It was certainly a wild choice from Mickelson, but at the time of the shot he was already 8-over par so maybe he thought he'd have a little fun out there at Muirfield Village, although his score didn't stop golf fans questioning his decision on Twitter.

and this is why Phil could have won alot more tournaments if he just had the other half of brain on his shoulders.

Visual proof it is Time for the champions tour

And then he hit a 10 yard full swing flop shot to a foot.... I don’t understand the thinking but hey it’s @PhilMickelson . Never question the calves https://t.co/KpZDfroPMd

Today Phil Mickelson has putted from 40 yards, hit a full swing flop from 40 feet and laid up on a Par 3. He’s a cocktail and a Bluetooth speaker from playing one of the solo Thursday post-work rounds where anything goes.

Phil Mickelson is outside of his mind

Only guys I know do this are my dad and @PhilMickelson. pic.twitter.com/RctSFlC2rD

If I had to pick one douche, it would always be Phil Mickelson. His antics are simply Hall of Fame. https://t.co/EEGQOCZMi8