Jon Rahm received a 2-shot penalty on his way to winning the Memorial Tournament, but wasn't told until after he won. 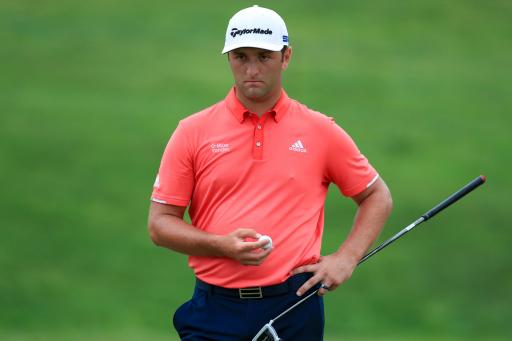 Jon Rahm made one of the best chip-ins of his career during the Memorial Tournament on Sunday, but unfortunately it was tarnished due to the Spaniard receiving a penalty after the ball moved before he hit it.

During a difficult final round at Muirfield Village, Rahm missed the green at the par-3 16th and faced a challenging chip from thick rough, with the greens playing firm and fast.

What followed was a shot that Rahm's hero, Seve Ballesteros, would have been proud of, as the 25-year-old flicked the ball into the air, before it landed on the fringe and made its way into the hole. Watch the epic shot below:

UNBELIEVABLE!@JonRahmPGA holes out for birdie on 16.

Unfortunately for Rahm, he was told during an interview with CBS following his victory that he was facing a 2-shot penalty after PGA Tour rules officials took another look at the shot and saw the ball move as Rahm put his club next to it. Watch the incident in the video below:

Jon Rahm was assessed a two-stroke penalty for a violation of Rule 9.4 after a ball at rest moved.

His score on the par-3 16th has been adjusted from a 2 to a 4. pic.twitter.com/HWbIN2woTr

Although the penalty had no effect on the result, Rahm was clearly shocked when he was told in the interview but after reviewing the incident with the PGA Tour's rules guru Slugger White, the newly crowned World No.1 accepted the decision.

“I didn’t see it,” Rahm said. “You know, I promised open honestly and I’m a loyal person and I don’t want to win by cheating. … The ball did move. It’s as simple as that.

“Had I seen it, I would have said something or maybe questioned -- not questioned, asked for a rules official and explained what happened and would have gone from there. But I mean, he had to zoom it in the iPad so much to see what was a very minimal oscillation that could have basically just been me putting the club down and all the grass just simply going down.

“It barely moves at all. Everything goes down with it. But the rules of golf are clear, and the ball did move. Unfortunately, it's going to have a bittersweet feeling to what was possibly one of the greatest shots of my career, the shot that this Sunday gave me the victory, but … I accept the penalty. That goes to show that you have to fight until the end.

“If it doesn't change the outcome of the tournament, does it really matter? Maybe. Again, I accept what it is; it did move. It doesn't take anything from the day, though. It's still probably one of the greatest days of my life."

The penalty incident caused a widespread debate on Twitter, with some golf fans saying that Rahm should have been disqualified and others saying that the penalty shouldn't have stood as it was difficult to see with the naked eye.

Should of been DQ for this, he was trying to improve his lye in the rough

And if the sissies at @PGATOUR had told him when it happened, it could have been a different outcome. Instead they allowed him to finish his round so he wouldn't be upset. Way to be politically correct.

I love golf. Golfers are great sportsmen. But golf has some of the dumbest rules in professional sports... just sayin.

Gimme a break, the ball went right back to its original position. The officials are just mad because they've never hit a chip in that beatiful.

I thought the PGA had asked TV to stop zooming in on these kind of shots from the rough for this very reason?

Garbage call..no way you see that in real-time and thank goodness you didn’t cost him the victory! The new rule that tv can’t make the call worked out well too.

To everyone saying how ridiculous this is: Let me tell you, the fact he improved his lie definitely played a role in the decision. They probably would’ve invoked the “camera lense/naked eye” decision had he not gone all P. Reed on 1st waggle. They gave him the lighter sentence

Stupid rule. Saw it live on CBS but thought, they're not going to call that... are they? Love golf but there're too may stupid rules, senseless. He didn't moved the ball intentionally, grass moved it! Wasn't in a hazard. Didn't improve his lie or increase his chances of making it

NEXT PAGE: Phil Mickelson attempts 234-FOOT PUTT during final round at Memorial...