But the Spaniard remains in contention to win the Irish Open at Portstewart. 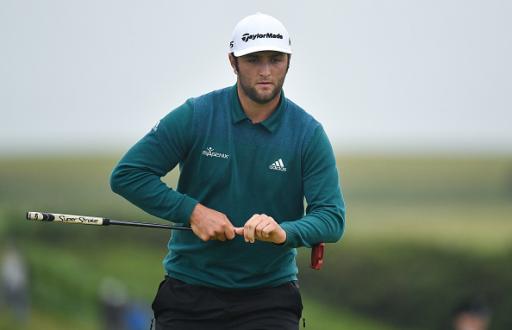 Despite revealing he is working on his temper, Jon Rahm continued to show signs of petulance on day two of the Irish Open.

Just three weeks removed from firing an F-Bomb and throwing his toys out the pram at the US Open, the big-hitting Spaniard was seen missing a five-foot putt on the fourth hole before smacking his putter head down on the green in disgust.

#jonrahm is a great player and a fan fave but this kind of stuff is not good. A post shared by Golfcentral Daily (@golfcentraldaily) on Jul 7, 2017 at 3:52am PDT

Rahm however managed to bounce back from that bogey with two birdies in his next three holes to move within one shot of the 36-hole lead at Portstewart.

And he wasn't the only one to lose his temper at Portstewart as home favourite Rory McIlroy, playing alongside Rahm, whacked his driver down on a tee box during the second round.

After signing for his second-round 67, the world number 11 explained he is trying his best to reel in his rage.

"Like I’ve said many times, I’ve apologised, I cannot feel any worse about it. I thought about it, I learned, I’m just letting things happen a little bit."