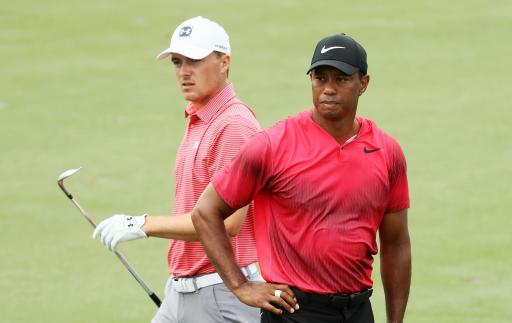 Tiger Woods' final-day surge at The Players Championship sunk in the water at TPC Sawgrass' famed Island Green par-3 17th, but the former world number one insists he "hit a good shot."

With hopes of a third Players title already out of reach, Woods came up short on the one hole where players have no margin for error. It would lead to his first double bogey on the hole since 2003 and an eventual tie for 11th.

Woods raced through the gears, just as he did on Saturday, playing his first 12 holes in 6-under, but he came unstuck with a bogey at the 14th to end any hopes of a miraculous final-day comeback over runaway leader and eventual winner Webb Simpson.

RELATED: TIGER WOODS - "I'M NOT THAT FAR FROM WINNING A GOLF TOURNAMENT"

Watch the video below...

Jordan Spieth, playing in the group with Woods, is taking some of the blame though.

“He went and looked in my bag, and I had a 52-degree which is a pretty aggressive play. I had to draw it from the water. And then he hit one and the wind is going like this, and if he caught this, he’s a tap-in birdie. And he caught (the opposite direction). It was unlucky there.”

Woods downplayed the role Spieth’s shot may have had on his own thinking, instead opting to emphasize the strengths of his overall game after playing his way from the cut line onto the cusp of the top 10 with rounds of 65 and 69 over the weekend.

“I got a puff that came back in my face,” he said. “That’s just the way it goes. I hit good shots all day long.”