Tiger Woods: I'm not that far from winning golf tournaments

Tiger Woods has said it before, but the golf world now fully believes him. 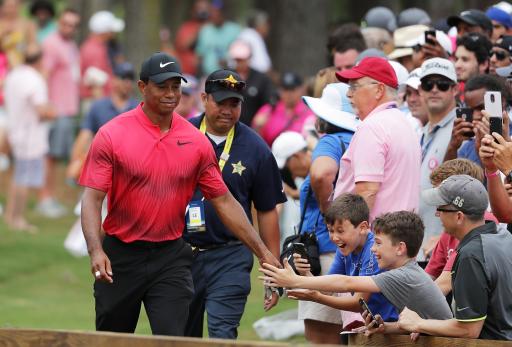 Tiger Woods may have finished a distant seven strokes behind The Players champion Webb Simpson, but the former world number one believes a first win since 2013 and 80th PGA Tour title is now just around the corner.

Woods, who found water at the Island Green 17th on Sunday en route to a fourth top-12 finish in his last six starts, is now back up to 80th in the world having been outside the top 1,000 at the beginning of last season due to his absence through back surgery

The 14-time major champion hit eight birdies in his first 12 holes Saturday, carding his best ever score at TPC Sawgrass, and he briefly got to within striking distance of eventual winner Webb Simpson by the 12th hole on Sunday.

RELATED: TIGER WOODS REVEALS THE TOUR STOP HE WANTS ONE LAST CRACK AT!

"I played so well this weekend; unfortunately, I just didn't cash in," said Woods, who performed much better with the driver on the weekend, missing only a handful of fairways.

"There's no way I would have predicted I would be at this point at the beginning of the year. But now I feel like I've got my playing feels back and I'm playing tournament golf.

"I'm not that far off from winning golf tournaments."

WHEN IS TIGER WOODS' NEXT EVENT?

According to Woods' official website, the US Open and The National are the next two tournaments on his playing schedule. The US Open runs from June 14 to June 17, giving Woods more than a month off, unless he decides to commit to another tournament in the meantime. Woods has also committed to play in the Open Championship at Carnoustie from July 19 to 22.

Will Tiger Woods win a tournament before the end of the year? Will he win a 15th major championship? Share your thoughts on our social media channels.