Jordan Spieth's caddie notes from Open final round are awesome! 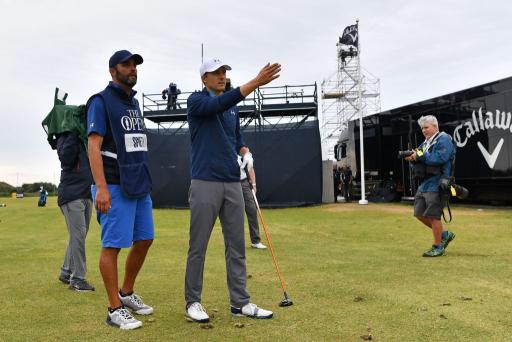 Jordan Spieth's caddie Michael Greller has revealed his Open Championship final round caddie notes to the European Tour, and they are a sight to behold, especially where the now famous par-4 13th hole is concerned.

A hole that will never quite be remembered the same following Spieth's drop into the practice range en route to an unlikely bogey five, Greller has shed light on the exact club selection.

Or not as the case might be. It was all guesswork. Then again, Spieth was approximately 120 yards to the right of the 13th fairway as he took his drop on the practice range almost as if it had been planned next to his golf equipment sponsors.

Here's a look at Greller's notes from Spieth's memorable Sunday finish where he finished birdie-eagle-birdie-birdie-par finish to land his hat-trick of career major titles.

While the notes provide pretty cool insight into how Spieth and Greller went about their business, they're probably not quite as cool as the moment Spieth told his bagman to "go get that" after sinking his eagle putt at 15.

Jordan Spieth
michael greller
Open Championship
Royal Birkdale
Previous
Fuming Beef labels radio presenter a "d***head" after being called a "clown"
Next
Jason Day tells GolfMagic: "At the end of some more hard work will come the masterpiece that is a victory"