Jordan Spieth's heartfelt letter in 2010 paved the way for success on the PGA Tour. 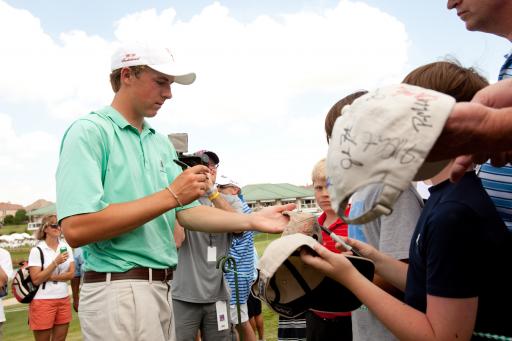 Jordan Spieth's letter as a fresh-faced 16-year-old asking for a sponsor exemption to the 2010 Byron Nelson Championship has been revealed by the tournament hosts ahead of this week's event.

Spieth, who was accepted an invite into his first ever PGA Tour event following the letter, more than lived up to his word as he went on to contend for the tournament before going to finish tied 16th.

Looking for a first chance to shine on the main stage, Spieth made a heartfelt plea to the tournament organisers.

"As a Dallas native, I have dreamed of playing in this event ever since my dad took me to watch when I was eight," wrote Spieth, now an 11-time PGA Tour winner with three major titles.

Spieth also went on to talk about watching Phil Mickelson at the tournament as a kid, a memory that has "stuck with me ever since."

He also mentioned his friend Justin Thomas, who made the cut at the 2009 Wyndham Championship, one of the youngest ever to do so.

Check out Spieth's heartfelt letter below...

Spieth headlines the field at the Byron Nelson this week and is a warm favourite at 5/1, while defending champion Billy Horschel is at 20/1.

Other standout players in the field include Sergio Garcia, Matt Kuchar and Jimmy Walker.

The tournament heads to a new venue this week in Trinity Forest Golf Club in Dallas.

US PGA
Rory McIlroy gives hilarious answer to question after setting US PGA lead
US PGA
Tiger Woods after Round 1 of US PGA: "Playing that kind of golf is gone"
US PGA
US PGA R1: Exhausted Tiger Woods struggles to keep up with Rory McIlroy
US PGA
WATCH: Tiger Woods snaps at camera operator during PGA Championship
US PGA
PGA Championship: Tyrrell Hatton already appears upset with course layout