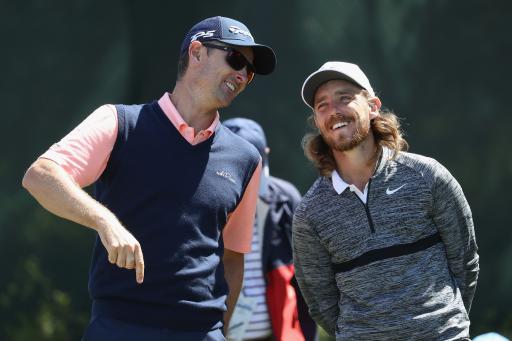 Justin Rose has revealed how wants to emulate the style of his compatriot Tommy Fleetwood following his blistering runner-up perfomance at the US Open at Shinnecock Hills.

Fleetwood, 27, came up one stroke shy in his bid to land his first major title when tying the low US Open score of 63 in the final round.

Brooks Koepka became the first player to successfully defend the US Open since Curtis Strange in 1989 with a score of 1-over par.

Rose, 37, however, admits it will now just be a matter of time before Fleetwood gets his hands on one of the big four tournaments of the season.

"Definitely, he's got a wonderful game," said Rose, the 2013 US Open champion, when questioned by the media as to whether Fleetwood would soon win a major title.

The result marked Fleetwood's best finish from 12 starts in a major, and the 2017 European Tour Race to Dubai winner has now finished fourth and second in his last two US Open appearances.

Rose might have a major in the bank and be standing higher up the world rankings than Fleetwood as third as opposed to 10th, but even he is copying elements of Fleetwood's game this season.

"But more so, he's got great temperament and I think that will stand him in good stead."

Rose also found himself in contention for the US Open over the weekend, but despite sitting just one stroke off the pace heading into the final round, the Englishman could only muster a 73 and he finished tied 10th on 7-over par.

The next crack at a major championship comes next month at the Open Championship at Carnoustie from July 19 to 22.

Justin rose
Tommy Fleetwood
US Open
shinnecock hills
golf majors
Open Championship
Previous
Brooks Koepka player profile: from the car crash that started him as a golfer to double US Open champion
Next
WATCH: Mickelson holes putt at 13 on Sunday, acts like he's won US Open!