Si Woo Kim lands biggest title of his young career to date, while Poulter records his best finish in two and half years. 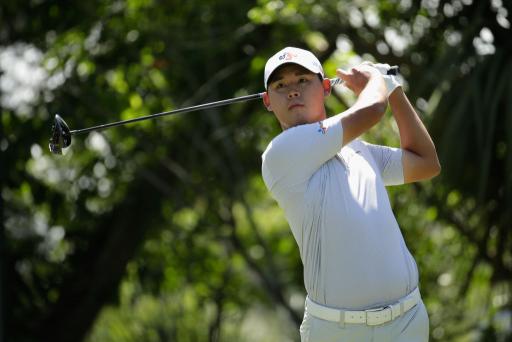 Kim, 21, who clinched his maiden PGA Tour at the Wyndham Championship last season, carded a flawless final-round 69 to finish on 10-under par.

Poulter, who thought he had lost his Tour card just weeks ago only for officials to realise there had been a mistake in Poulter's accumulation of points, picked up his best finish since finishing second at the Turkish Airlines Open in November 2014.

The Englishman briefly moved to within a shot of the lead when making birdie at 11, but he handed the initiative back to Kim when making bogey at the 12th.

Standing two shots down at 18, Poulter looked to be in serious danger of making a mess of 18 when forced to take a drop from the trees, but somehow played a miraculous shot through the trees to within inches of the cup for a tap-in bogey.

U-TURN: POULTER GETS HIS TOUR CARD BACK

"From being where I was a few weeks ago to finish tied second, it's a good week," said Poulter, who has now locked his PGA Tour card up for next season following the result.

"It's been a tough 18 months to be honest. Today I felt like a couple of putts slid by. Barring a horrible second shot at the last, it was a very good week.

"I can now plan a schedule and enjoy my golf. Hopefully this is a stepping stone to pushing on for the rest of the year."

Kim started the final round two shots adrift of 54-hole leaders Kyle Stanley and JB Holmes, but breezed his way to the front on the opening nine with birdies at the first, seventh and ninth.

With many of his nearest challengers struggling to keep pace, Kim calmly strolled home for his second career title with pars at each hole of the back nine.

"I never expected I was going to win this tournament," said Kim, who had failed to post a top-20 finish on the PGA Tour all season.

"I had not been playing the best golf this season so I'm just very excited to be the champion."

The victory pushes Kim up into the world's top 50 and straight into the automatic positions for this year's International Presidents Cup team.

Four players have now won on the PGA Tour aged 22 or below, with Kim joining Tiger Woods, Sergio Garcia and Jordan Spieth.

Spain's Rafa Cabrera-Bello became the first player to record an albatross in the tournament's history and finished fourth alongside Stanley, the latter who joined Paul Azinger as the only ever player to birdie the iconic par-3 17th every round of the week.

IN THE BAG: SI WOO KIM

PGA Tour
Si Woo Kim makes a THIRTEEN on a par-3 at WGC-FedEx St Jude Invitational
US PGA
Jon Rahm would take "BRIBE" from Sungjae Im if military service is on the line
PGA Tour
Si Woo Kim must pay $100,000 if he SNAPS another golf club!
PGA Tour
Golf fans react as Si Woo Kim is DENIED a birdie by rules official
The Masters
Si Woo Kim SNAPS HIS PUTTER on day two at The Masters!