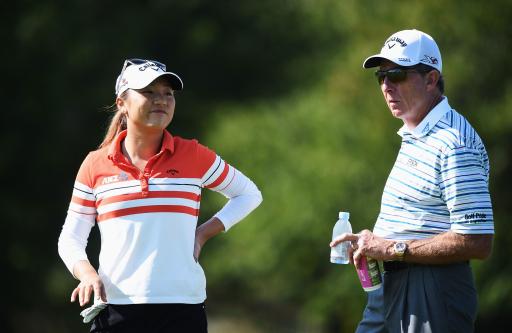 Golf coach David Leadbetter has written a detailed post as to how his relationship with former ladies world number one Lydia Ko broke down, in part down to her father wanting her to change her swing.

Once on track to become one of the greatest professional golfers in history, Ko lost her way towards the end of 2016 when replacing her caddie, coach, equipment and fitness trainer all at once, and now sits at world number 16.

In a lengthy post on his webiste, Ko's former coach Leadbetter revealed his side of the story.

"What many people didn't understand, was that the A Swing, which was a commercial name for a book we published, was for the most part technique that had worked in the early years with Sir Nick Faldo and Nick Price, amongst many others," wrote Leadbetter.

"It was adapted to Lydia in order to make her swing more efficient. If you looked at the statistics, especially greens in regulation, this proved to be true. It was a very simple approach, one she understood and had minimal maintenance.

"We honestly felt like this was the best approach for Lydia, because not being the strongest player, it provided natural energy to her swing."

Leadbetter also writes that Ko had been burning out in late 2016, and that her father pushed for a coaching change.

"She had a very busy schedule in 2016, including the Rio Olympics. Unfortunately, in our opinion, Lydia's schedule was such that a lot of fatigue and tiredness had set in. Somehow through it all, she managed to win a silver medal, despite the fact that she was physically and mentally exhausted - a classic symptom of burnout.

"Along with all of this, her father, a non-accomplished golfer, heard rumours that she needed to change her swing and made suggestions to Lydia to change it - independently of her coaches.

"In this day and age, we have ways of measuring energy output in the swing. In the last quarter of the year, she had lost 20% of her energy which could only mean one thing - complete fatigue

"Unfortunately, to the unknowledgeable, this can be misconstrued as experiencing swing issues. Well, you will have swing issues when you're too fatigued to workout, practice, and are mentally drained. At the end of the year, she and her "team" decided that even though she had won five tournaments including a major earlier in the year, that they wanted to move on."

Leadbetter then closed by wishing Ko the best, but took a pessimistic view on her future playing career.

"Lydia is a great young lady, we only wish the best for her. We honestly felt that if the decision was left entirely up to her, that she would still be with us.

"Lydia can certainly win more tournaments, even majors, but there's no possible way that she can play better than she played for those first three years. It just goes to show, that not always is the grass greener on the other side of the hill!"

Previous
Sergio Garcia gets in strop, launches his Callaway Rogue driver in the trees!
Next
In the bags: Levy and Landry