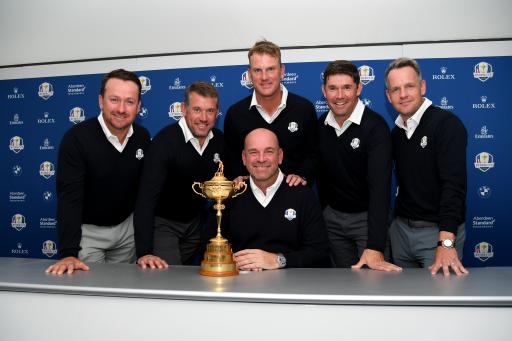 Bjorn revealed the news in a press conference at Wentworth ahead of this week's BMW PGA Championship, where GolfMagic is in attendance.

The Dane revealed the news and we were there to break it...

We also caught Westwood taking a cheeky selfie as Bjorn addressed the media...

Loving the cheeky selfie from @westwood_lee during Thomas Bjorn’s announcement of his European Ryder Cup Vice-Captains A post shared by GolfMagic.com (@golfmagic.com_) on May 22, 2018 at 6:23am PDT

Westwood has played in the last 10 contests since making his debut in 1997 and was on the winning side seven times, while Harrington was vice-captain to Paul McGinley in 2014 and Darren Clarke in 2016.

McDowell, who claimed the winning point at Celtic Manor in 2010, and Donald will make their debuts in the backroom staff at Le Golf National in Paris as Europe seek to regain the trophy following defeat at Hazeltine two years ago.

"All five are widely respected throughout the game, are all current players who are well known to the players who will be in our team come September and they also all possess a knowledge and understanding of what to expect from the golf course at Le Golf National too," said Bjorn.

“You only need to look at the record books to see that their Ryder Cup pedigree speaks for itself. Each of them has played both home and away so they are well versed in the contest and know how to handle the special and unique atmosphere.

“They all possess strong personalities but each of them will also bring something different to the team, giving us great balance. They have forthright opinions which is vital under the spotlight of a Ryder Cup week and is something which can only help our cause as we try and regain the trophy.”

The quartet could still qualify for the biennial contest which takes place from September 28-30, but Westwood (117th) is the only player currently ranked inside the world’s top 200.