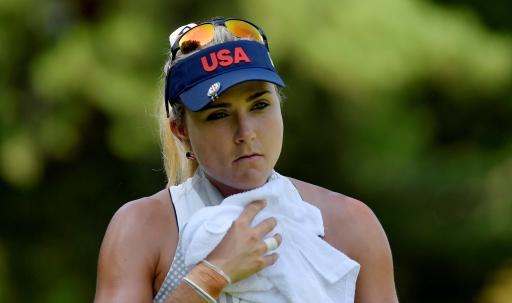 Lexi Thompson's caddie Jack Fulgham was forced to give up the bag on the 15th hole in round one of the Women's Olympic Golf Tournament due to heat exhaustion as temperatures soared into the high 90s at Kasumigaseki Country Club in Tokyo, Japan.

Thompson, who went on to shoot a 1-over 72 to lie tied 36th and six shots off the pace set by Sweden's Madelene Sagstrom, saw LPGA Player Services Director Donna Wilkins replace Fulgham on the bag for her final three holes of the day.

"I came into the day having a sore throat, not feeling great, and then dealing with my caddie just not being able to finish, it's tough," said Thompson, the only returning 2016 Olympian for the Team USA women’s squad.

"I was so worried about him and, I mean, it's so hot out there. I'm from Florida and I'm still not used to that bad of heat. But I just hope that he's okay and he gets the hydration he needs the nutrients tonight to go into the next few days. If not, I'll figure something else out. I just want him to be healthy."

Fulgham is said to be recuperating well and is expected to be fine, but Thompson’s caddie plans for Thursday are still to be determined.

Rolex Ranking No. 1 Nelly Korda shot a 4-under 67 to move into ominous position one shot behind Sagstrom at the top of the leaderboard.

"I'm hoping I'm in total control, it's golf at the end of the day," said Korda, who is making her Olympics debut.

Other big-name players in early contention for the Olympic gold medal include South Korea's Jin Young Ko on 3-under par and Team USA's Danielle Kang on 2-under par.

NEXT PAGE: DID YOU KNOW ABOUT THIS RULE ABOUT LOOKING INTO A PLAYER'S BAG?