Did you know the rule about looking into a fellow golfer's bag?!

Are you permitted to check out a fellow golfer's bag to see what club they are using? Here's more on the rule... 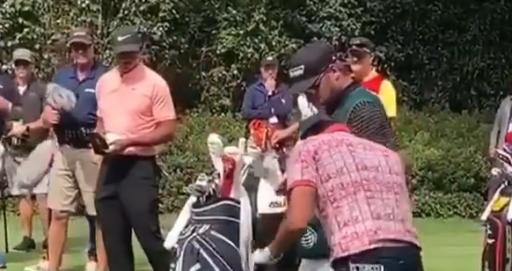 For this week's golf rules debate provided by Golf Rules Questions on Instagram, we are taking a closer look at Rule 10.2a when it comes to seeking advice and checking out a fellow competitor's bag to see what club they are using in order to gain some sort of advantage.

Tiger Woods was caught doing exactly that in a tournament two years ago, when he peeped into the bag of Abraham Ancer to see what club he was using on the tee.

So was Tiger right to be doing that? Yup all good... so long as he was not moving anything to find out, or asking Abraham or his caddie what club he was using for the shot in hand.

Here's a closer look at Rule 10.2a by the R&A, which explains in more detail about 'Advice and Other Help':

During a round, a player must not:

- Ask anyone for advice, other than the player’s caddie, or

This does not apply before a round, while play is stopped under Rule 5.7a or between rounds in a competition.

Previous
Does golf club CUSTOM FITTING really make a difference?
Next
Lexi Thompson's caddie forced out of Olympic R1 due to HEAT EXHAUSTION