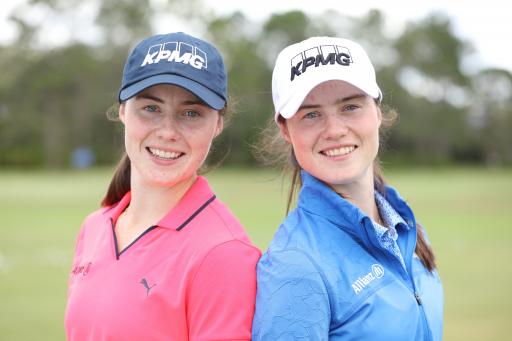 Leona and Lisa Maguire, the highly talented Irish sisters who have just completed a glittering golfing scholarship at Duke University in North Carolina, have turned professional under the guidance of Modest! Golf, the exclusive management company set up by compatriot Niall Horan and the Modest! Management group.

Leona, the former leading amateur player in the world who was No.1 on the World Amateur Golf Ranking for a record 131 consecutive weeks, and her twin sister Lisa are set to make their professional debuts at the Shoprite LPGA Classic in New Jersey this week.

"I’m thrilled and very proud that Leona and Lisa have become the first Irish players to sign with the Modest! Golf management stable," said superstar entertainer and keen golfer Niall.

"They’ve both represented Ireland at junior and senior amateur level with distinction and we’re confident that they’ll take the professional LPGA circuit in their stride and raise the profile of Irish golf even further."

Even Rory McIlroy sees the signing as a milestone for Irish golf.

“It has been great to see both Lisa and Leona representing Irish amateur golf so well over many years. I wish them the very best as they make their professional debuts this week at the Shoprite Classic and I look forward to watching their careers unfold.”

The 23-year-old sisters will be sponsored on Tour by KPMG, the global professional service company that has invested in other golfing stars such as Phil Mickelson, Stacy Lewis and Ireland’s Paul Dunne. Other brand associations include Allianz, PING golf equipment and PUMA Golf apparel.

Mark Freeman, general manager COBRA PUMA Golf, said: "We are extremely pleased to be working with and supporting Leona & Lisa as they embark on their professional careers. We are excited to start up the relationship with Modest Golf Management and look forward to working with them on future announcements."

Horan said: "We are delighted one of the leading sports brand in golf, PUMA, is supporting the girls - it’s an exciting partnership."

Modest! Golf commercial director Mark McDonnell added: "PUMA Golf has a history of supporting some of the best young talents in golf from Rickie Fowler to Lexi Thompson. It’s great that the Maguire girls follow such a world class stable of players."

Delighted to announce the signing of @leonamaguire & @lisa_maguire_ to Modest Golf Management. Leona, is the former leading amateur player in the world who was No.1 on the World Amateur Golf Ranking for a record 131 consecutive weeks & won ten times on the US College circuit as well as two National ‘Player of the Year’ titles. Twin sister Lisa was a three-time All-Ireland School’s Champion and winner of 16 amateur titles. The sisters are set to make their professional debuts at the Shoprite LPGA Classic in New Jersey this week. The girls will represent KPMG, Allianz, Ping & Puma as they start their careers as professional golfers. A huge welcome to the @modestgolfofficial team Lisa & Leona.

A post shared by Modest Golf Management (@modestgolfofficial) on Jun 6, 2018 at 5:25am PDT

Originally from Ballyconnell, County Cavan and the Slieve Russell Hotel Golf and Country Club, the Maguire sisters have long been expected to join the professional ranks after enjoying illustrious amateur careers. Lisa put aside her personal aspirations to caddy for her sister at the Rio Olympic Games in 2016, when Leona was one of only three amateurs to qualify for the return of golf to the Olympics.

Leona then went on to win the 2017 Ladies British Amateur Championship and won nine times on the US College circuit as well as two National ‘Player of the Year’ titles while at Duke’s and an All-America selection this term. Lisa was also selected ‘Athlete of the Year’ by the National Strength & Conditioning Association and acclaimed by Duke coaches for her determination and prowess.

"The twins are great addition to our stable of young talent and we’re excited to welcome them to launch our new Ladies’ Division,! said McDonnell.

"We’re determined to build on our strong Irish connections, which include our promotion of the Northern Irish Open on the European Challenge Tour in August this year at Galgorm Castle, plus the NI Amateur Open in July at the same venue."