Suzann Pettersen and Kathryn Imrie to add knowledge and experience to European side. 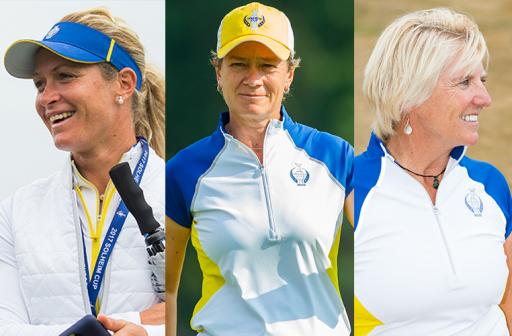 European Solheim Cup Captain Catriona Matthew has named Suzann Pettersen and Kathryn Imrie vice captains for The 2019 Solheim Cup, to be played against the United States at The Gleneagles Hotel in Perthshire, Scotland, next September.

The duo are both extremely passionate about The Solheim Cup and will bring a wealth of knowledge and experience to the backroom team, having been involved in a combined total of 18 contests.

Speaking ahead of the Aberdeen Standard Investments Ladies Scottish Open, Matthew, popularly known by her nickname ‘Beany’, said: “I am delighted to have Kathryn and Suzann alongside me on the journey to The Solheim Cup at Gleneagles. They both possess considerable experience and will be huge assets over the next 14 months as we look to bring the trophy home to Europe.”

Pettersen has made eight Solheim Cup appearances as a player and featured in three victorious European teams, winning 19 points from her 14 matches. The 37-year-old from Oslo, Norway, was also a vice captain to Annika Sorenstam at Des Moines Golf and Country Club in Iowa in 2017 after she was forced to withdraw due to a back injury and was later replaced in the squad by Matthew.

Hugely respected for her golfing achievements, Pettersen has won 21 individual titles including two Majors: the 2007 McDonald’s LPGA Championship and the 2013 Evian Championship. She twice reached number two in the Rolex Women’s World Golf Rankings and is a former Ladies European Tour Rookie of the Year and LET number one.

Pettersen, who is expecting her first child this Autumn, said: “It’s an extreme honour to be able to assist Beany on her captaincy for The 2019 Solheim Cup at Gleneagles. The Solheim Cup has definitely been the highlight of my career and to be able to help the team bring the trophy back would mean a lot to me. I’ve been on many teams alongside Beany and I have the utmost respect for her as a player and as a friend. She is a world class player and a true sportswoman both on and off the course and I am sure she will bring those values to the team.”

Imrie played in the 1996 contest at St Pierre Hotel in Wales and won 1 ½ points, winning her four-ball match with Annika Sorenstam and halving her foursomes match with Liselotte Neumann. She also featured in the 1994 match as a reserve at The Greenbrier in West Virginia and rates travelling to Washington DC on Concord with the European team as one of the highlights of her career.

She played amateur golf for Scotland and represented GB&I in the 1990 Curtis Cup at Somerset Hills Country Club in New Jersey with Matthew. The pair solidified their friendship throughout their time together on tour.

Imrie said: “I am super excited and extremely honoured to be Beany’s vice-captain. I see my role as a vice captain to be exactly what vice captains do, and that is to support the captain. As one of her closest friends it will be easy to be her sounding board and to offer opinions and suggestions about all aspects of her captaincy. The captain has a big job to do and I am sure Beany will have her plan of exactly what she expects of me. I just want to do the best job possible so we can pick the strongest team and then guide them to get the Cup back during the week of the event. I can’t wait for September 2019.”

The 2019 Solheim Cup, the 16th staging of the contest, will be played on 9-15 September, 2019 and Europe will look to regain the trophy for the first time in six years, following the last win in Colorado. The United States team has won the last two competitions in Germany and Iowa and will be looking to make it three in a row in Scotland.

Themes of equality, innovation and experience will be threaded through all the event’s communications as The 2019 Solheim Cup aims to engage both the traditional golf audience and the wider sport fan, raising the profile of women’s golf both in Scotland and internationally.

The 2019 Solheim Cup will not only showcase the stunning assets of Scotland, the Home of Golf, but also build on the legacy of the successful 2014 Ryder Cup at Gleneagles. It will underline that Scotland is the perfect stage for major golf events as it seeks to help inspire a new generation of children to take up the game invented in their home country.