Team TaylorMade superstars will face off in a doubles match to raise $3 million for charity. 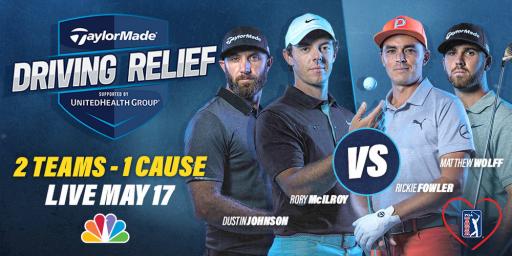 Additionally, Farmers Insurance® has pledged $1 million to back a birdies-and-eagle pool to benefit Off Their Plate, a charitable organisation helping COVID-19 healthcare workers and impacted frontline shift employees.

Building upon this initial fundraising of $4 million, PGA TOUR Charities will announce a Text-To-Donate activation and online donation platform powered by GoFundMe to allow viewers to make additional contributions and raise funds for COVID-19 relief.

PGA TOUR Entertainment will produce live coverage, which will feature commentary from NBC Sports’ Mike Tirico from his home in Michigan, as well as analysts Paul Azinger and Gary Koch and play-by-play with Rich Lerner from an off-site production facility. On site at Seminole Golf Club will be on-course reporters Jerry Foltz and Steve Sands.

Thanks to a pledge from UnitedHealth Group, the primary charitable component will see the teams compete in a $3 million charity skins match as each team will compete for one of two charities, the American Nurses Foundation and CDC Foundation.

Additionally, Farmers Insurance also kicked off fundraising efforts with a $1 million pledge, to back a birdies-and-eagles pool to benefit Off Their Plate, whose work creates a conduit for local communities to provide nutritious meals to the hospital teams we depend on and economic relief to local restaurant workers who have been most affected by COVID.