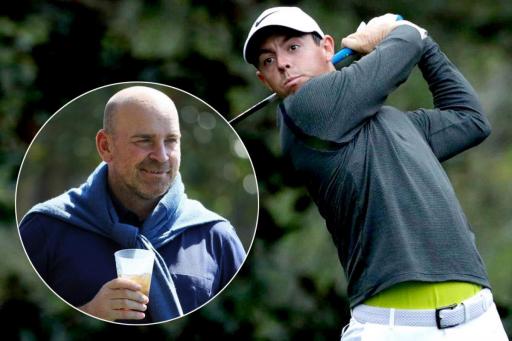 European Ryder Cup captain Thomas Bjorn has joked that Rory McIlroy's cryotherapy prank from earlier this month could see him sidelined until the Sunday singles at Le Golf National.

McIlroy was at the heart of a prank orchestrated two weeks ago during the rain-affected BMW Championship in suburban Philadelphia.

WATCH: RORY PRANKS BJORN AHEAD OF THE RYDER CUP!

"It was an interesting phone call, that’s for sure!" said Bjorn, who is now seemingly more than ready to get his own back on McIlroy and co. in the coming days leading up to golf's greatest biennial clash between Europe and United States.

"I was like, ‘I don’t know what he’s talking about!’. I was making up all sorts in my head, and you hear about all sorts of therapies and ice baths and you think ‘athletes and modern-thinking players… maybe this is something’.

"But then all of a sudden I got a video through saying, ‘here’s a video, sorry’.

"He’s in big trouble! He might not play until Sunday now! That’s okay, they looked like they had fun. It’s never fun when you get done on the prank but have to take it in the spirit it is, it was a good moment.

"If you know me well enough you have to think that at some stage during the next weeks they’ll find themselves in a situation that’s a little uncomfortable!"

Watch this space to see what Bjorn comes up with!

The Ryder Cup tees up at Le Golf National in Paris from September 28 to 30.

The United States are bidding to win their first Ryder Cup on European soil in 25 years since last doing so at The Belfry in 1993.