Michael Jordan: I'm not scared of ANYONE in golf...apart from Ian Poulter

The former Chicago Bulls all time great shares his thoughts on the Ryder Cup and the Postman. 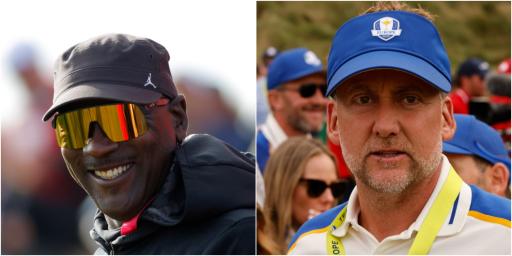 Michael Jordan was known for his unrelenting desire to win at all costs.

Jordan did not care if he losts friends throughout a career that saw him win six NBA championships and multiple MVP titles.

Who can forget his famous line from the Netflix documentary series The Last Dance where he stated: "And I took that personally".

Now 58 years old, Jordan has reportedly spent a large part of his retirement on the golf course gambling for dizzying sums of money.

He has attended every single Ryder Cup since Brookline in 1997 and was pictured at Whistling Straits grinning from ear to ear.

But for someone so fearless on the court it seems one person on the golf course strikes fear into the heart of MJ, and that person is none other than Ian Poulter.

"Golf is a battle within yourself."

Jordan was being interviewed by Golden State Warrior's point guard Steph Curry when he made the revelation.

He told Curry: "I’m not scared of anybody… but Ian Poulter.

“I used to go and watch him all the time. If I’m in any of his matches or walking down, he finds me after he makes a good putt, and it’s like, ‘Man, I didn’t do anything. I like you. I support you.’ I stay away from him when I’m walking. I won’t go watch him."

Jordan also told Curry that he likes to go fishing in between golf games because it helps him work on his patience.

Poulter is no stranger to social media so it will be interesting to see whether the Postman responds.

NEXT PAGE: FIVE CHALLENGES FOR DECHAMBEAU THIS SEASON