Sungjae Im shot an incredible round of 9-under-par on Sunday to blow away the field at TPC Summerlin by four shots. 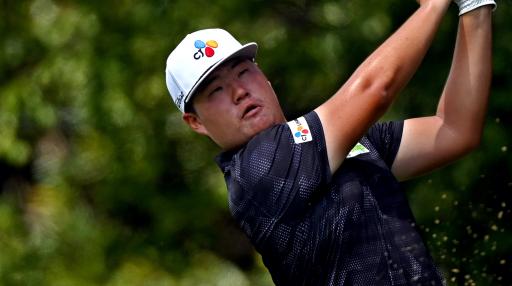 Sungjae Im won the Shriners Hospitals for Children Open after carding a scintillating final-round score of 62, winning the tournament by four shots.

At one stage it looked as though the two-time PGA Tour winner could join the illustrious 59 club, but he settled for a bogey-free round which saw nine birdies and just one missed green.

It was the South Korean's 100th start on the PGA Tour and coincidently, his first win came at the Honda Classic in 2020 which was his 50th career start.

"The big difference between today and yesterday was that today there was no wind. That made it easier, my driver, iron and putting game worked how I wanted it to and it gave me a good result," Im said after his victory.

Im began the final round three shots behind the leader Adam Schenk on 15-under-par and he soon got to work with four birdies in his first seven holes.

The 23-year-old reached 19-under-par at this stage, but the best was yet to come as he made five consecutive birdies from hole 9 to hole 13.

He had made nine birdies in his first 13 holes and he had opened up a five-shot lead on 24-under-par. While he was tearing up the field at TPC Summerlin, Marc Leishman and Rory Sabbatini posted clubhouse leads of 19-under-par.

Mistakes early on from Schenk, who first joined the PGA Tour in 2018, cost him dearly. He made bogeys at the 4th, 6th and 8th holes to fall back to 16-under-par.

Matthew Wolff began the day one shot behind Schenk and entering the back nine, he was only two shots behind Im on 20-under-par.

But Wolff, 22, was struggling to find the fairways in Las Vegas and his long game was the source of his biggest mistakes. He made critical bogeys at the 10th and 13th holes to trail Im by five shots on 19-under-par.

The man born in Cheongju parred his final five holes to post the 24-under-par figure and to Wolff's credit, he fought to the bitter end. He birdied the 15th and 16th holes to finish on 20-under-par.

Im broke the record for the most birdies made in a single PGA Tour season in 2021 and today in Las Vegas, he broke his personal record for the number of birdies he has made in one round.