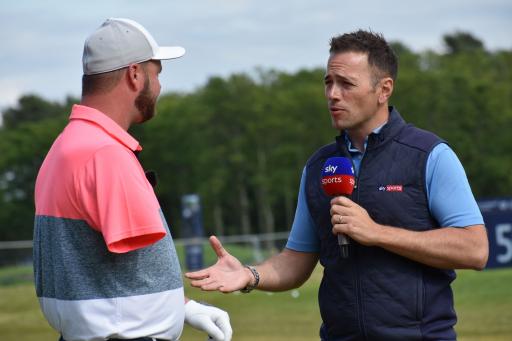 Former European Tour player and now Sky Sports presenter Nick Dougherty has agreed to be an official ambassador for EDGA, the international body that encourages people with disability to thrive through golf.

Dougherty, from Liverpool, England, is a popular figure in golf at all levels of the game, from holding aloft three European Tour trophies as a player, to his encouragement of young juniors across the UK.

After a stellar amateur career as a teenager he emerged from the Faldo Series to become the Sir Henry Cotton Rookie of the Year (2002) in his first season on the European Tour. Nick has also been a winner for Great Britain & Ireland in the Walker Cup, and later in The Seve Trophy, this time under the captaincy of his mentor Sir Nick Faldo.

In recent years, Nick has become a respected golf analyst, presenter and commentator for Sky Sports where he is much appreciated by both fans of the game and Tour players, for his expertise, balanced insight and ready sense of humour.

EDGA is a not for profit volunteer-based association which is made up of the National Golf Federations from 29 countries around the world. The EDGA team provides advice, guidance and standards to all the leading golfing bodies; The IGF, The R&A, The USGA, The EGA, and works closely with the European Tour on the delivery of showcase events that involve golfers with disability.

The connection between the two first occurred during the European Tour’s Betfred British Masters at Hillside in May 2019, when Nick interviewed Tony Lloyd, a golfer with the disability Phocomelia, and analysed Tony’s swing for TV. The resultant video clip was one of the best viewed items for any EDGA player in recent years.

Later that year, Nick conducted ‘Master Class’ sessions during European Tour events in Scotland, with Reinard Schuhknecht, a South African golfer who hits with his left arm, and also in Dubai with England’s Mike Browne, a left leg amputee.

Both sessions helped to promote EDGA and its players and allowed Nick to learn more about EDGA’s work and its objective to encourage 500,000 people with disability to try golf. Nick has since raised awareness of EDGA across TV and his social media platforms.

The EDGA team is now delighted that Nick has become an official ambassador, supporting the body which offers international competitive opportunities to golfers with disability, while offering a range of training to coaches, therapists, volunteers, clubs, and golfers who wish to be more active in the disability space.

"I am really proud to become an ambassador for EDGA," said Dougherty.

"Having worked alongside EDGA’s players for Sky Sports I have been struck by their focus, their ability to adapt and their determination to reach their potential. I’ve been hugely impressed.

"Learning about EDGA you soon realise just how therapeutic golf can be in someone’s comeback, or their management of illness or injury: whether competing over 18 holes or just learning to have a putt for the first time and enjoying the fresh air.

"Any of this can help greatly. I am now delighted to support EDGA’s objective to open up the game to more people with disability, and to share with them all the great things about our game."

Tony Bennett, President of EDGA, said: "Nick Dougherty understands perfectly that golf’s physical and mental health benefits can be of huge help to people with disability, and also the need for us to welcome more players into the game for this reason.

"From the start, through his readiness and enthusiasm to interview and help our players to develop, we believed he could be a wonderful ambassador for EDGA.

"Nick is a really good guy, an expert of the game, a great broadcaster, and he cares about people, every golfer. We are all thrilled that Nick has agreed to support us in this way."

Learn more about the work of EDGA at www.edgagolf.com