"I've never had such a rush," says Ed Sandison after making an ace with his very first shot back on the course during the coronavirus lockdown... 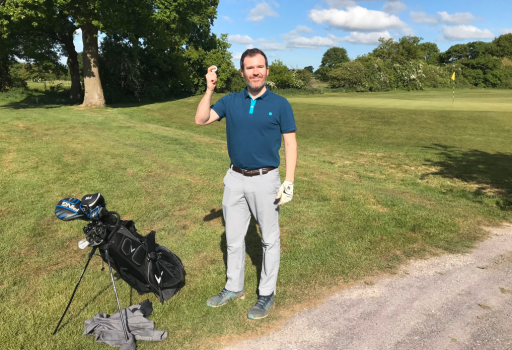 OCEAN TEE founder Ed Sandison did the unthinkable today after making his first ever hole-in-one with his very first shot back on the golf course - on a day when England's golf courses reopened for play during the coronavirus lockdown.

Sandison, who spoke to GolfMagic just two weeks ago to talk about his new OCEAN TEE Mako polo shirt, performed his incredible feat with a 4-Hybrid on the 176-yard par-3 1st hole at Styal Golf Club.

"It was utterly incredible," Sandison told GolfMagic, revealing he was wearing his new OCEAN TEE Mako polo shirt on the course for the first time.

"I've never had such a rush, and I can safely say I am still buzzing some eight hours later.

"It was a bit of a fade, and quite an average connection in all honesty but it rolled its way onto the green.

"I didn't realise it was in until I got up there and couldn't see it anywhere. I glanced at the hole as a bit of a joke and I could see the top half of the ball poking out the cup."

Sandison, who was playing with his father-in-law, a member at Styal Golf Club, admitted he went on to shoot well under his 18-handicap with a round of 13-over par.

"It was one of the best rounds I've had in years," said Sandison.

The new social distancing guidelines were also a success, according to Sandison, and everyone he could see out on the course was adhering to the new rules correctly.

"Everyone was being sensible and safe out there, it was good to see," he said.

"The course was immaculate, but the thing that really stood out was just how happy everyone was to be out and about. It was a really good atmosphere, and the club still had great energy about it."