Check out GolfMagic's betting tips for the next stop on the European Tour, the Open de Espana. 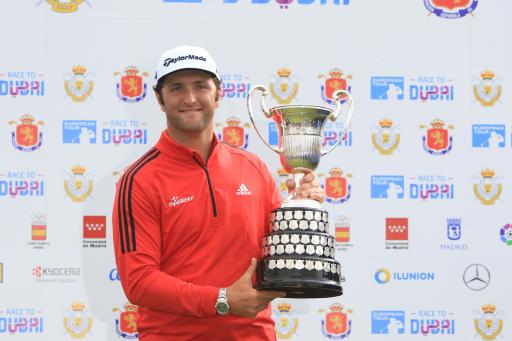 After two weeks in the United Kingdom, the European Tour heads to Spain for the Open de Espana at Club de Campo Villa de Madrid, for the first time since 1996 when Team Europe captain, Padraig Harrington, took home the trophy.

Last year it was home favourite Jon Rahm who won the event and the Spaniard is the favourite to win the tournament this year as he looks to defend his title.

With odds as short as 3/1, you might want to put your money elsewhere unless you're backing Rahm heavily. The world No.5 came up short to Danny Willett at the BMW PGA Championship and he failed to bounce back at the Alfred Dunhill Links, so Rahm will be hungry for another European Tour win and on home soil, he's got a fantastic chance.

Sergio Garcia is the second favourite at 6/1, who climbed back to 33rd in the world following his win at the KLM Open in the Netherlands and a third Spaniard in Rafa Cabrera Bello follows close behind at 10/1, but there are plenty of other players in this week's field who have a great chance of winning.

The Chinese superstar already has two wins on the European Tour and after going quiet for a while he seems to be back in form. Li put together a fantastic third round of 64 at the Dunhill Links last week and finished 16-under par for the tournament.

An incredible ball striker and a very difficult player to stop once he gets going, so if the 24-year-old starts well, he could shoot seriously low. The Open de Espana is typically a low-scoring event and that could once again be the case at Club de Campo Villa de Madrid. Li is one of the best putters on the European Tour right now and currently leads the putts per greens in regulation stats, so I expect him to make a lot of birdies this week. He's the fourth favourite to win behind the three Spaniards and if they don't start well enough then Li could find himself as the tournament favourite by the weekend.

Another Spaniard who could well be in the mix to win this week on home soil. Arnaus has finished inside the top ten in Andalucia, the Czech Republic and the European Masters in recent weeks on Tour and will be very confident playing in Spain. He's finished in 2nd place three times this year but has also missed the cut on numerous occassions, but I'd be surprised if he were to do so in his home country.

With odds of 28/1 he's definitely worth a bet this week and could sneak through the leaderboard under the noses of his fellow countrymen.

Last year at the Open de Espana it was Jon Rahm who was victorious, but he was pushed all the way by this man. Elvira found the water on the 17th last year to essentially hand the tournament to Rahm, so I wouldn't be surprised to see him around the top of the leaderboard again this year.

I think the bookies have his odds far too long and Elvira is definitely worth an each-way bet at least. He's finished runner-up on the European Tour three times, including twice in March earlier this year. Elvira has won four times on the Challenge Tour, one of which coming in Madrid, where he was born and the home of this week's event. Elvira loves to play in front of a home crowd and he will be relishing the opportunity to win his first European Tour title on home soil this week.