Paige Spiranac dresses up as Street Fighter’s Cammy for Halloween, and then offers golf fans a chance to win a round. 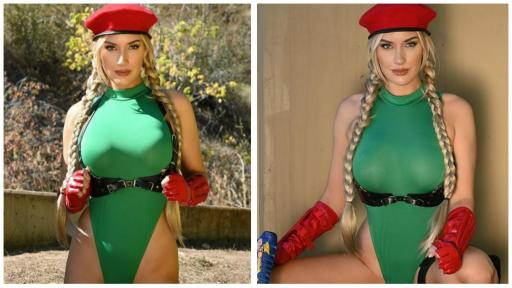 Paige Spiranac has taken to social media to reveal her choice of Halloween outfit, as well as offer two lucky golf fans the chance to win a round of golf in 2023.

Spiranac, who has the most followers of any individual golfer on Instagram including Tiger Woods, has stunned her fans by dressing up as Street Fighter's Cammy for Halloween.

For those none the wiser, Cammy, also referred to by her codename Killer Bee, is a fictional character in the Street Fighter fighting game series.

Cammy debuted in 1993 as one of the four new characters in Super Street Fighter II: The New Challengers.

Spiranac shared three images of her wearing the costume.

"I love their Street Fighter series so this was a no brainer."

This just in. Men like golf and boobs. https://t.co/npsesP4B4t

GolfMagic threw up a post on social media showing the most followed people in golf on Instagram.

Paige topped the list with a whopping 3.6m followers which - at the time of writing - was 600,000 more than the 15-time major champ, 82-time PGA Tour winner and widely-considered G.O.A.T in Eldrick Tiger Woods.

When we posted the graphic, Paige reacted by joking: "This just in. Men like golf and boobs."

Max Homa then also got involved with the post, citing he should probably start making his own calendar!

Spiranac is also giving golf fans a chance to win a round of golf at Bulle Rock in Maryland.

Want to win a round of golf for 2 at Bulle Rock? Maryland’s #1 public course! Click here to enter-https://t.co/BWJOjM7Hjf pic.twitter.com/ROqcbxgAII