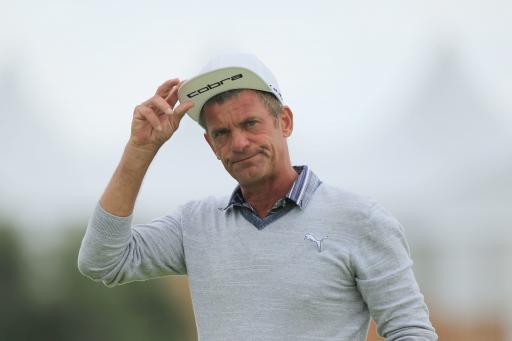 Former European Ryder Cup hero Jesper Parnevik was involved in one of the most peculiar golf rules incidents of all time during the final round of the SAS Championship on Sunday.

Parnevik, 54, missed the opportunity of taking a rare 'mulligan' during the Champions Tour event when his short bogey putt on the par-3 third hole horseshoed around the cup and ended up hitting his foot by accident.

The ruling not only left the three-time European Ryder Cup star scratching the surface, but even rules officials too.

Instead of replaying the putt without penalty from its original spot, Parnevik instead tapped home the ball from where it had ended up for what he considered was a double-bogey.

Unfortunately for the Swede, the rule, in this incident, required Parnevik to have taken the bogey putt again because it "accidentally" hit him. He didn't though, and it cost him an extra stroke in the process.

"When ball on the putting green accidentally hits any person, animal or immovable obstruction, this stroke does not count and the ball must be replayed on its original spot," rules official Brian Claar told Reuters.

It took some time to sort out though, admitted Claar, with rules officials forced to phone the US Golf Association for clarification.

"They said 'did that really happen out there'?" said Claar. "He actually gets a mulligan. It's strange you get a do-over because there's no such thing as a do-over unless you hit a power line or something. He should have put it back and tried again."

As a result, Parnevik ended up with a triple-bogey six on the third hole.

It mattered little to the end result for Parnevik, however, as he ended up carding a final-round 75 to finish well down the field in a tie for 68th on 6-over par.

American Jerry Kelly won the tournament on 16-under par to narrow the gap between himself and leader Scott McCarron atop in the season-long Charles Schwab Cup Points race.

GOLF RULE Q: WHAT HAPPENS IN THIS MUD BALL INCIDENT?