MUD BALL RULING - what is the golf rule in this scenario?

Golf Rule Question of the week - do you know the answer? 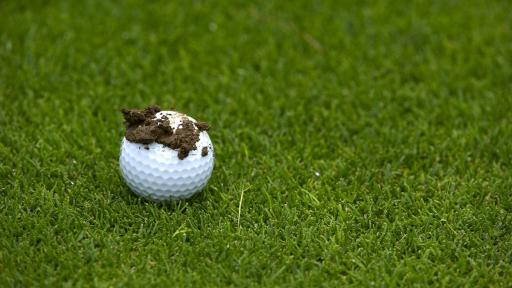 Think you're up to speed with golf's new rules? Here's an interesting one to twist your melon where mud balls on the fairway are concerned.

We caught up with PGA Rules Panel member Ashley Weller, who offered us three answers to the following rules question that he faced during a recent tournament...

Your ball lies in the fairway, preferred lies are not in operation and a piece of mud is adhering to your ball right where you want to strike it with your next shot.

Your fellow competitor asks you to lift your ball because it is close to where he is going to take his stance for his next shot.

Aware you are not allowed to clean your ball you mark it and carefully lift it while he plays his approach shot.

Which of the following statements is true? (extra points if you can identify the interpretation!)

A - You must replace the ball in exactly the same position and orientation so that the mud will still interfere with your strike.

C - You must replace the ball in the same spot and in any orientation except with the mud under the ball.

Scroll down to see if you were right...

INTERPRETATION 14.2c/1: When replacing a lifted ball on a spot, the Rules are concerned about only the location. The ball may be aligned in any way when being replaced (such as by lining up a trademark) so long as the ball's vertical distance to the ground remains the same.

For example, when using a Rule that does not allow cleaning, the player lifts his or her ball and there is a piece of mud sticking to it. The ball may be aligned in any way when replacing it on the original spot (such as by rotating the interfering mud towards the hole).

However, the player is not allowed to replace the ball in an alignment so the ball rests on the mud unless that was its position before it was lifted. The “spot” of the ball includes its vertical location relative to the ground.

ASHLEY WELLER IS AVAILABLE FOR RULES EVENINGS - GET IN TOUCH HERE