We all hope that we have the passion for golf that this man does at his age... 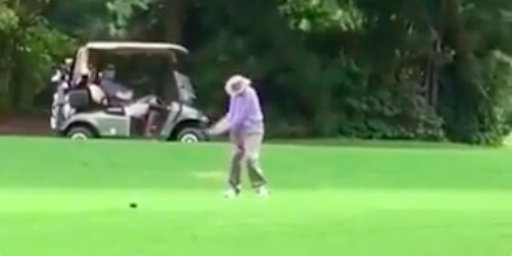 Golf is the best sport in the world for many reasons. One of the main reasons is that people of all ages can play and this is how golf club communities are formed.

In football or rugby, you are at the end of your career at the age of 34 or 35. Your body just can't handle the physical exertion and movement that is required to compete at the top level.

If you are 34 or 35 years old on the PGA Tour, you are still very much in your prime and able to compete to the best of your ability. You can still maintain a good level of flexibility and athleticism at this age.

But there is one man that defies all age barriers in golf and he is in the video below. Not only can he complete a full swing, but he clearly still has the passion and drive to play his best.

RELATED: PRO GOLFER WITH TERMINAL CANCER SET TO TEE IT UP AT BERMUDA CHAMPIONSHIP

This golfer is 102 years old which is even more evidence to suggest that the sport is for absolutely everyone. He is equally as enthusiastic for the game as people more than half his age.

However, it would appear that this man's temperament on the golf course has not improved with age. As he hits his tee shot, he is left fuming by the outcome.

The PGA Tour tweeted the video and they kindly used a trailing line graphic to show the flight of his club as he sends it bouncing across the ground.

His playing partner in the buggy watched on as the veteran vented his feelings. Despite his age, he clearly stills expects the highest standard of play in each round.

It is a testament to this man's health and fitness that he is still able to play golf at 102 years old and he is an inspiration to us all.