PGA Tour player Pat Perez has one of the most impressive Nike Air Jordan collections you will ever see. 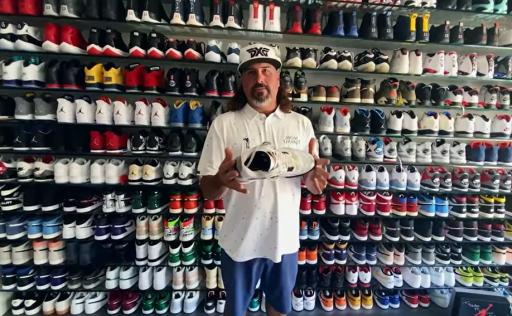 Pat Perez is currently ranked 144th in the Official World Golf Ranking, but when it comes to collecting the famous Nike Jordan trainers, I think most people would rank him World No.1.

Starring in a video recently posted on YouTube by Complex, Perez showed off his insane Jordan collection in his Scottsdale home, where he claims to have collected round 1000 pairs throughout his life. Watch the video below to see the collection for yourself:

At the start of the video, Perez tells an interesting story of how his love for Jordan trainers started.

As a child growing up in a family with little income, Perez found a pair of Air Jordan IV trainers in the bin and knowing how popular they were, he decided to keep them.

Perez explains that he wore the pair every day until they "literally fell apart" and it took him a long time of making money through golf until he could buy another pair.

"When they showed up and I pulled them out of the box, I couldn't believe that I actually had them in my hand," said Perez.

"I paid a fortune for them but at that time I didn't care because I wanted that shoe again in my hand and now I've got them and in a golf shoe too, it's just so unbelievable."

Perez goes on to tell of how he sat down with Michael Jordan himself at a poker table and discussed the idea of a custom made Jordan golf shoe.

The basketball icon made Perez's dreams come true as he told him he would recreate the Jordan IV Cement - Perez's favourite Jordans - into a golf shoe.

“I only wear them when the conditions are absolutely perfect,” Perez said. “It has to be dead dry — no water anywhere, afternoon round, no chance of rain, no nothing, because I don’t want anything to happen to them. I travel with them. They don’t sit in any locker. They don’t leave my side really. I hold onto them like I hold onto my wallet.”

Perez said that his rarest pair are a pair of Jordan IV "Wahlburgers" inspired by famous actor Mark Wahlberg which were given to Perez as a gift when he and his wife Ashley had dinner at Wahlberg's home.

“The cool thing is, he signed each shoe,” Perez said. “This is his pair, they’re a size 10 … It’s pretty cool to have this. I have this in my office, I have them showcased and this is definitely my rarest pair.”

NEXT PAGE: Thorbjorn Olesen apologises to Danish supporters and says he is "incredibly sad"