Reed docked two-stroke penalty for improving his lie in the sand... 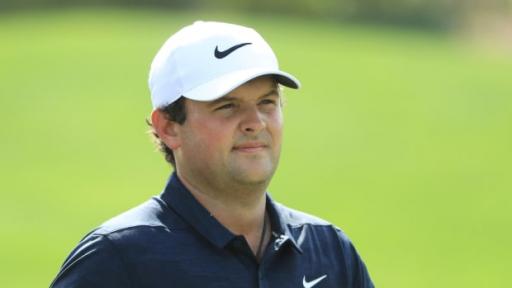 Patrick Reed is being labelled a "cheater" by a huge number of golf fans on social media tonight after he was seen improving his lie in a waste bunker TWICE on the 11th hole during his third round of the Hero World Challenge.

Reed was able to ground his club in the sand because it was not a bunker, but he was not allowed to scoop away sand with his club on two occasions as it clearly improved his lie.

The former Masters champion spent much of the day out in front, but when the NBC Golf broadcast revisited his bogey at the 11th hole it became clear for all to see that he had committed a rules violation in the waste bunker.

You could barely see Reed's ball on the first shot, and then after two scoops of sand with his practice swings, the lie suddenly became a lot clearer.

RELATED: PATRICK REED CLAIMS HE HAD NO INTENT OF CHEATING

The incident looked incredibly similar to the one in the same tournament back in 2015...

For all you rules gurus out there... What is Patrick Reed doing here in the waste bunker? #WhatsTheRule? pic.twitter.com/XES2KY6XaD

Reed did not report the violation as he went about his business, but he was then spoken to by PGA Tour officials to ask exactly what he was doing, and it resulted in a two-stroke penalty and a triple-bogey eight instead of a bogey-six at the 11th.

The American spoke to the media after his round, and looked completely embarrassed at what he had done, but you can check out his explanation in the video below...

Social media could not believe what they were witnessing. Here's a look at just a handful of tweets, including one from Eddie Pepperell and Thomas Bjorn...

Taking Gus and Pip to the beach in a minute. Glad I brought my clubs up with me cause after seeing @PReedGolf last night I’m gonna get some practice in... What the fuck were you thinking?!

Patrick Reed should be DQ'd. That was disgusting

Patrick Reed should be disqualified. What a scum bag

And this is why no one likes Patrick Reed. Unbelievable https://t.co/4uyXCgEI5C

I mean......that’s like not even near the top 10 of worst things Patrick Reed has done

Patrick Reed needs to be off the President’s Cup team.

Reed did birdie the final hole but it resulted in a round of 2-over 74 instead of 72 and he will start the final round three strokes behind on 10-under par.

Gary Woodland hit the front with a birdie at the final hole to move to 13-under par, one stroke ahead of Henrik Stenson.

Tiger Woods carded another solid round of 67 to progress to 11-under par alongside defending champion Jon Rahm and Justin Thomas.